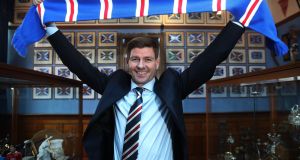 Steven Gerrard shakes is unveiled as the new manager of Rangers at Ibrox Stadium on Friday: “I have confidence I can deliver here as a manager.” Photograph: Ian MacNicol/Getty Images

Steven Gerrard revealed that gut instinct was key to his acceptance of the post of Rangers manager, after being unveiled at Ibrox on Friday. Gerrard has signed a four-year deal that will begin on June 1st because of commitments with Liverpool and BT Sport. This marks his first job in management.

“When the call came to speak to Rangers, it was a no-brainer,” Gerrard said. “It was a different feeling in my stomach from other opportunities I have had to be a manager. I got a special feeling and I knew then that Rangers was for me. I have confidence I can deliver here as a manager. A huge opportunity presented itself. I was very aware of the size of club having watched from afar for many years.”

A relaxed, composed Gerrard was greeted by hundreds of Rangers supporters as he made one of the most eagerly anticipated arrivals in Scottish football history. Gerrard replied with a forceful “Bring it on” when asked how he may handle the intensity associated with football in Glasgow. Celtic’s 5-0 win over Rangers last weekend meant a seventh title in succession for the side managed by Brendan Rodgers.

“I don’t mind being under pressure,” Gerrard said. “I played under pressure and I have lived under pressure since I left school. Since I have stopped playing I have missed the pressure of going out and fighting for three points on the weekend. Pressure isn’t a bad thing. If you’re working under pressure then you’re in a good place. I know there will be a lot of scrutiny and a lot of pressure but that’s what I love about being involved in football.

‘Winning is my buzz’

“I’m here for a reason: to front the challenge and take the club forward. I’m confident or I wouldn’t be in this seat. In terms of targets I just want to win. That’s what I love doing, that’s my buzz. That’s the demand here and I’m looking forward to it.

“I love a challenge. My parents brought me up in life to front up to a challenge if you feel it’s the right one. That’s what I’m here to do.”

Gerrard refused to be drawn on what resources may be made available to him or what his broad targets are from next season. “From the first conversations with the club I found positivity and ambition which matches mine,” he said.

“I don’t think this is the time to speak about what’s available and what has been said to me in private meetings. The most important thing for me is the opportunity and the challenge. The key here is stability but I need to get my teeth into the job before I can weigh up exactly where we need to strengthen. I’m confident that we can do well.”

Gerrard confirmed that Gary McAllister would join as his assistant. “I have huge respect for Gary and he ticks the box where maybe I’m not the most experienced manager sitting here right now,” Gerrard said. “He’s been in the game for a very long time and as a partnership I feel that will be very strong. I have known him for a long time, since he was a player at Liverpool, and we remained close.

“He will be a rock and a very big support and as soon as I asked him it was a ‘yes’ straight away. I learned so much from Gary as a person and I couldn’t ask for anyone better to take on this challenge with me.”

Gerrard dismissed fears about his lack of managerial experience. The 37-year-old will leave his post coaching in Liverpool’s academy and is bringing Michael Beale from there to join his staff.

“That [experience] is not an issue for me – it seems to be for other people,” he said. “I can’t control that but I respect everyone’s opinion. I’ve been around a big football club for a long time. I have been around big matches, I have watched big managers perform.

“There is only one way to go and get experience, that’s by believing in yourself and taking a challenge head-on. You have to believe in yourself.”

Dave King, the Rangers chairman, was similarly bullish. “That Steven hadn’t managed before was the only box he didn’t tick,” King said. “If I looked at a lot of the other names, they had experience but not all of it was good. I don’t think experience will work against him.”

Gerrard said he did not speak to Rodgers, his former manager at Liverpool, before making the decision to join him in Glasgow. “Me and Brendan are fine,” Gerrard said. “I’m looking forward to the challenge.”

Speaking on the other side of the city, Rodgers welcomed Gerrard but warned of a new environment. “It is a totally different experience,” said Celtic’s manager. “There is a curve of experience that you need to go through. I am a much better manager, I think, than I was when I started. So you only get it through doing it.”

1 Tour de France: Every yellow jersey winner must feel guilty by some association
2 Kevin Babington: Learning to live again after life changed forever on Long Island
3 Dundalk’s horizons widen ahead of clash with leaders Shamrock Rovers
4 Clifford brothers to the fore as East Kerry retain title
5 Matt Williams: The sky is not falling in on Irish rugby - but Ireland do need a new plan
Real news has value SUBSCRIBE
Crossword Get access to over 6,000 interactive crosswords