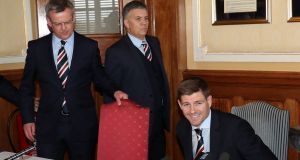 Rangers have confirmed that Steven Gerrard is their new manager, after the former Liverpool and England captain signed on a four-year deal with the Glasgow club.

Gerrard said: “I am honoured to become the next manager of Rangers. I have enormous respect for this football club, and its history and tradition.

“I can’t wait to start this new journey at Rangers as we look to build on the many successes that this club has achieved.”

Rangers said the club would make announcements on Gerrard’s management team “in due course”.

Chairman Dave King added: “We are delighted to confirm today that Steven Gerrard will become the next manager of Rangers.

“From the very beginning, talks have been extremely positive and we believe that Steven is the right man to drive Rangers forward.

“He was extremely impressive throughout our negotiations and we are convinced that he has the necessary knowledge and temperament to lead the club to the success we all desire.

“This a special day for our club, our fans and for Steven.”

The club’s director of football Mark Allen added: “From the moment we met with Steven to discuss this opportunity, we felt that his ambitions and desire to succeed equalled our own for the club.

“Make no mistake, Steven fully understands the demands that come with managing a club of this stature and we look forward to exciting times ahead.”

Gerrard said at his Ibrox press conference: “I’m very aware of Rangers, the size of the club, I’ve watched them from afar and been lucky enough to watch some of the Old Firm games.

“It was a no-brainer for me. There were a lot of different things to think about but from that first phone call I got a special feeling and I knew that Rangers were for me.”

Asked about being a managerial novice, Gerrard said: “I can’t do anything about having no experience. There is only one way to get experience – to believe you have the right characteristics to take on a challenge and confront it.

“In football if you’re working under pressure, you’re in a good place. I’ve missed that pressure of fighting for three points.

“I know there will be a lot of pressure and a lot of scrutiny but that’s what I love about football.”

Gerrard said he will give himself some time in the role before he starts making changes.

“Stability is the key and I want to give these supporters an exciting team and a winning team and one to be proud of,” he said.

“I need to get my feet in the door and teeth into the job before I work out where we need to improve.”

When asked if he was confident in his move being a success, Gerrard said: “I’m confident or I wouldn’t be sitting in this seat.

“If I didn’t have confidence in myself and my staff and the board I wouldn’t have come here.

“In terms of targets, I just want to win football matches. That’s my buzz.”

Gerrard was asked whether he had spoken to Celtic boss Brendan Rodgers, whom he worked under at Anfield, before accepting the post.

“I haven’t spoken to Brendan regarding this role, but me and Brendan are fine, we always have been fine,” he said.

“I’ve spoken to close friends and family, people in the game that I’m tight with.

“This opportunity doesn’t come around all the time – clubs with this size, stature and history. I believe I can come in and make these fans happy.”

Chairman King said Gerrard “ticked every box” other than experience.

“A lot of the other managers who have been named, they have had experience but that experience was not necessarily good,” he said.

Gerrard also announced that former Liverpool team-mate Gary McAllister will work alongside him at Gers.

“I can say who my number two is going to be. Well my assistant, I don’t like to call him my number two as he’s just as important as me and that will be Gary McAllister,” Gerrard said.

“He’s a long-time friend of mine. I played alongside Gary at Liverpool and stayed in touch since. I have huge respect for Gary and he ticks the box where maybe I’m not the most experienced manager sitting here right now but he’s been in the game for a very long time and as a partnership I feel that will be very strong.

“He will be a rock and a very big support and as soon as I asked him it was a yes straight away.”

“I learned so much from Gary and I couldn’t ask for anyone better to take on this challenge with me,” Gerrard added.

“The contract starts on June 1st, hopefully there are some positive results to come in the short term.

“You’ve got to come to work with a smile on your face.”