Gambles on both sides in Steven Gerrard's Rangers appointment 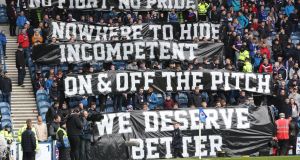 Rangers fans display banners during the league match between Rangers and Hearts at Ibrox on April 22nd, 2018. Photograph: Getty Images

Board the Glasgow subway to Govan, exit right on to Copland Road, turn on to Mafeking Street, swing left and there it is. Rising up before you with its decades of history, wood-panelled corridors, polished trophy cabinet: Ibrox, home of Glasgow Rangers. This is the “institution” everyone has mentioned in the past week.

Rangers have been playing football on this patch of Clydeside since 1887, when a cake and wine banquet welcomed the first visitors Preston North End.

Glory has also been served up, and as recently as a Sunday morning in mid-March you could sense the anticipation that more was on the way.

Celtic were the visitors to Ibrox that lunchtime. The gap between the teams was six points, but a home win would cut it to three and, despite Celtic’s game in hand, the prospect of a title challenge had the blue faithful giddy.

The noise when Josh Windass lashed Rangers ahead after just three minutes was sonic. The Gers were back.

Eight weeks on and the gap between the two clubs is 13 points. Rangers have been beaten twice by Celtic since, 4-0 in the Scottish Cup and 5-0 in the league. Over three games Celtic’s advantage is 12-2. The caretaker manager Graeme Murty has been offloaded, players have scuffled among themselves.

This is the most recent and relevant evidence of where Rangers are as a team. The Ibrox stands may be packed and the stadium can still induce awe, but on the pitch, where it matters most, Rangers are lightweight. In the supposed two-horse race that is Scottish football, they could finish fourth.

And suddenly Steven Gerrard has been confirmed as the new manager.

Gerrard must have more information than the rest of us because the Rangers job in 2018 looks about as tempting as a burger van.

Gerrard’s appointment is only one of the elements of a curious situation. In England the Rangers discussion is framed around Gerrard’s career, where the 37-year-old is in terms of his CV. The institution – Ibrox – is referred to in passing, but the bigger story is the Liverpool hero, not the 145-year-old club.

To use Rangers’ motto, Gerrard is deemed “ready”.

This opinion could be correct but it is guesswork. There is no body of managerial work to assess. Gerrard has been coaching Liverpool’s under-18s, and those running Rangers would need to know how he has performed in that role, what he has done constructively, any mistakes he has made.

It’s called due diligence. It has not been a strong feature of Rangers this century.

In Scotland, while there is some excitement about the arrival of Gerrard at Ibrox, there are doubts too. There this is not about Gerrard’s CV – it’s about Rangers’ future. The English view is taken as an insult.

In Scotland the general concern is more about the level of football nous on the Ibrox board – is this a kneejerk response to the latest three Celtic victories? – and exactly how much money it possesses.

Because unless Rangers are going to enable Gerrard via serious funding, a la Kenny Dalglish at Blackburn Rovers, then they are taking a punt on his managerial ability and pulling power. Coaching developments

Those anxious about this Rangers gamble might also point out that there have been two high-profile coaching developments at Anfield this week. It would have reflected differently on Rangers’ board had Zeljko Buvac been the Liverpool coach they had sought out and interviewed.

Part of a football board’s job is to be on the inside, collecting knowledge and information for times of uncertainty. Hence Arsenal sign Arsene Wenger, Southampton recruit Mauricio Pochettino. Homework had been done.

Within football Buvac is highly respected. Jurgen Klopp is being self-deprecating when calling Buvac his “brain”, but he is clearly an influential figure.

Another niggle in all this could be described as the Alex Ferguson factor. Given his standing, it continues to puzzle that players from the Ferguson era – Giggs, Nevilles, Gerrard – do not follow his example.

Ferguson started at East Stirling, then went to St Mirren. Admittedly, he did so because he had to financially, but these were pieces of his education. Gary Neville jumped straight into Valencia without speaking fluent Spanish.

“I was learning something new about management every day,” Ferguson said. “Although I was making mistakes, I was not repeating them.”

Ferguson knew Rangers, the institution, from the inside as a player. He could tell Gerrard the Rangers manager has no room for mistakes, the Glasgow stare is fierce. Similarly, Rangers have no room for another error.

From the streets of Govan, Ibrox looks impressive; from Ibrox, Steven Gerrard looks the same. But these are views from a distance.

In this odd embrace, both parties had reason to hesitate.

Walcott could come back to haunt Southampton

Theo Walcott is 29. It is a detail to re-check because Walcott still looks about 16. It was at that age he burst onto football’s broad consciousness with a move to Arsenal that was a sensation. Arsenal were said to be paying £12 million for a teenager.

Southampton were the club Walcott was leaving, and on Saturday, now an Everton player, Walcott faces his first club at Goodison Park. Southampton’s Premier League future is in jeopardy, and Walcott can make the situation worse.

Walcott’s 2006 transfer can be seen as the beginning of a Southampton sales pattern that has left them in this scramble. Gareth Bale went to Tottenham two years later. Three years on Alex Oxlade-Chamberlain joined Walcott at Arsenal.

Those are three significant departures. Then in the summer of 2014 Dejan Lovren, Adam Lallana and Rickie Lambert left for Liverpool, Callum Chambers for Arsenal, Luke Shaw for Manchester United and Jack Cork for Swansea.

This all had to tell on Southampton, or so you would think. It could in the next four days. Everton away, Swansea away.

If relegation comes, the roll call of sales will be read out again. But what is as startling is that Southampton have managed so well without these players. They have a productive academy and have bought cleverly. Six seasons in the Premier League have brought four top-eight finishes.

Logic says the business model at St Mary’s ultimately leads to relegation. Southampton have fought that idea but on Merseyside, home of so many of their former players, Walcott could deliver a harsh reminder.