Stephanie Roche shortlisted for Fifa Goal of the Year 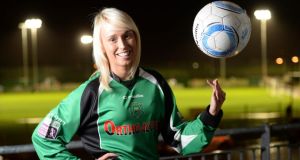 Stephanie Roche has made it to a shortlist of three for the Fifa Puskás Award for the best goal of the year with Robin van persie and James Rodriguez. Photograph: Dara Mac Dónaill/The Irish Times

Ireland’s Stephanie Roche has been shortlisted for Fifa’s Goal of the Year award alongside Colombia’s James Rodriguez and Robin van Persie of the Netherlands.

The former Peamount United striker, who scored the goal for the club against Wexford Youths, was among a star-studded pool of nominees before a public vote to cut the number of contenders down to three today.

Both her rivals scored their goals at the World Cup, Van Persie’s coming against defending world champions Spain in the group stages in Brazil, while Rodriguez’s volley was struck against Uruguay in the second round.

The 25-year-old from Shankhill in Co Dublin will now travel to Zurich on January 12th where the Puskas Award will be handed out at the Fifa Ballon d’Or ceremony. A   new poll has opened and will close during the live television show on the night of the awards. You can cast your vote HERE.

“Obviously it this is fantastic for me so I owe a lot of thanks to everybody who has voted for me and who has been behind me," said Roche. "It has been fantastic. I am just delighted I actually get to go to the awards so thanks and maybe I can go and win it now.”

Argentina and Barcelona forward Messi, winner on four occasions, made the shortlist for the eighth time in a row and Portugal’s Ronaldo, last year’s winner, for the fourth time running.