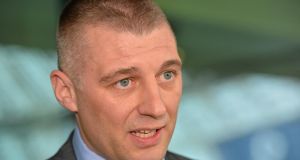 St Patrick’s Athletic may be unlikely to repeat last year’s big win in the first meeting of the season with Shamrock Rovers in Tallaght tonight but even a draw for the visitors would be a blow to hosts who were comfortably subdued by their former manager’s current side a week ago in Oriel Park.

It’s just short of a year since Liam Buckley ’s side first alerted Stephen Kenny to the fact that things might not go to plan at Rovers. The then league champions came to Inchicore early last April unbeaten in the league and safely past Cliftonville in the Setanta Cup.

Confidence was further boosted by the fact that the team had scored six goals without reply in its previous two games – against Shelbourne and Bohemians – but all of that was forgotten by the final whistle in Richmond Park where the home side dished out a 5-1 hammering to their rivals, with Chris Forrester and Christy Fagan scoring two apiece.

There has been the traditional close-season player exchange and so Killian Brennan, who fared poorly for Rovers in the hefty defeat, will be hoping to do better in central midfield for St Patrick’s while James Chambers and Seán O’Connor both have the potential to make life uncomfortable for their former team-mates if they find their best form.

Trevor Croly is again likely to be without Mark Quigley due a calf problem while Pat Sullivan is a doubt due to a slight neck strain. Buckley has the same squad to choose from, with Dave Ryan still ruled out by a hand injury and Stephen Maher by suspension.

Stuart Taylor should also have the same Limerick squad with him on the journey to Dublin as he looks to follow up an impressive debut at Thomond Park with a win at his former club, Drogheda United. The hosts have mounting problems already with doubts over the fitness of Gary O’Neill and Gabriel Sava coming on top of problems with Alan McNally, Derek Prendergast and Cathal Brady.