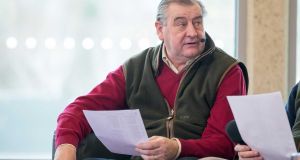 Trainer Noel Meade was one of those critical of the decision to make Tote Galway Plate day an evening fixture although a couple of hours here or there mightn’t count for much should his big race hope, Snow Falcon, land the €250,000 feature.

Just 17,332 people officially attended last year’s Plate when Balko Des Flos emerged victorious after the field for the summer’s most coveted steeplechase prize were sent on their way at 5.35.

That attendance tally continued a slide in crowd figures for one of the main races of festival week and one attempt by the track authorities to arrest that trend has been to put back the Plate to a 7.20 ‘off’ time.

Some unhappiness has been expressed within the industry about that and Meade, who is chairman of the Trainers’ Association, initially labelled it a terrible decision.

Whether a later start can do the trick with attendance levels remains to be seen although a forecast for persistent rain on Wednesday will hardly be a help.

Conditions were also wet when Balko Des Flos won a year ago and rain may not be the only familiar element to Wednesday’s renewal of the historic race.

Michael O’Leary’s Gigginstown Stud team once again have half a dozen starters as they try for a fourth win in five years.

Balko Des Flos’s trainer Henry De Bromhead is going for three in the last four and has five runners as does Willie Mullins. Gordon Elliott has four. So too does JP McManus while Jessica Harrington has ‘just’ the two.

The likes of Meade and Tully East’s trainer Alan Fleming could be forgiven for feeling surrounded by big guns but they still look to hold first-rate chances of their own.

Meade’s 2014 Plate winner Road To Riches is third reserve to add further to Gigginstown’s strength but it is the first reserve that will be the focus of much more attention.

Patrick’s Park has missed the final cut by one after being ante-post favourite for much of the last week.

Whether or not he can get into the race proper depends on one of the final 22 declarations dropping out.

It’s a situation harking back to 2013’s controversial Plate when the first reserve Carlingford Lough got into the race after one of JP McManus’s four runners was a declared a non-runner due to a change in ground conditions. Carlingford Lough subsequently led home a 1-2-3 for the owner.

Ground conditions are immaterial for the notably versatile Snow Falcon, a high-class staying hurdler and good enough on the flat to finish runner-up in an Irish Cesarewitch.

However half a dozen starts over fences have indicated a major steeplechase pot looks within his capabilities. The Irish National at Easter looked such a prize until he was hampered and unseated rider at the 13th fence.

Only one Plate winner has carried 11st or more to Plate success in almost two decades. But for a horse that got to a rating of 158 over hurdles, Snow Falcon’s 148 mark over fences still looks an encouraging prospect at any time.