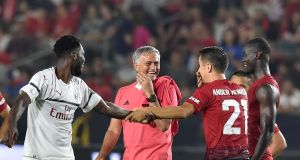 Jose Mourinho is not expecting to get what he wants this summer, but the Manchester United manager insists only bringing in one more player is “not a drama”.

The wheels have threatened to come off during the club’s pre-season tour of the United States, with the Portuguese becoming increasingly outspoken and irritated by a variety of matters.

Transfers are arguably chief among the issues as United have so far only managed to bring in Brazil midfielder Fred, raw full-back Diogo Dalot and third-choice goalkeeper Lee Grant.

Mourinho freely admitted he wants another two new signings in a bid to launch an improved Premier League title challenge by the August 9 deadline, but attempted to downplay the frustrations of only getting one.

Asked if he was confident he would get both, the United boss said: “No. I am confident I get one.

“I am confident I get one, but I think two I am not going to get which is not a drama.

“I think in every pre-season it happens basically the same and probably with every club, which is the manager wants more.

“It’s our nature, it’s out way of being — you always want more for your team.

“But then club decisions are different and normally you don’t get what you want, which happened basically during all my career.

“So, if I get one player until the end of the market, that’s fine.”

Mourinho gave United executive vice-chairman Ed Woodward his list of “five names a few months ago” and is now playing the waiting game as the deadline creeps closer.

Imposing Leicester centre-back Harry Maguire and Tottenham’s Toby Alderweireld have been strongly linked with a move to Old Trafford, as have a variety of other defenders.

“It’s not going to be very different. We have basically the same players.

“The players that we have bought one is a goalkeeper cover, another one is a 19-year-old kid.

“So, in fact, we have one new player which is Fred so of course our team is not going to be very different.”

Fred made his first United appearance off the bench in Saturday’s 4-1 friendly loss to Liverpool after enjoying his post-World Cup downtime.

Mourinho is still without a number of players, who reached the latter stages in Russia, and made clear his preference that they cut their breaks early to aid preparations for the season opener against Leicester on August 10th.

The rescheduling of that match to a Friday compounded the United manager’s frustrations over the early start date of a season that for the first time will see the summer transfer window end before campaign begins.

“I agree that when the Premier League starts, the transfer window close,” Mourinho said. “I agree with that.

“I am not a big fan of some player to start the Premier League with one club and a couple of weeks later the transfer window is still open and he moves to another club and he plays against his former club. I really don’t like that.

“I agree totally with the window closing at the same time the Premier League starts.

“What I don’t agree is that the Premier League starts now.

“You look to other countries and the countries with lots of players in the World Cup, they start later.

“You look to Spain, to Italy, they start later, and the Premier League could, should do that.”

Marcus Rashford ‘blessed’ to be fit again and back in the goals 17:57
Matheus Pereira inspires West Brom as they keep in touch with Leeds 17:44
West Ham edge closer to safety despite late Shelvey equaliser 16:50
Enable can’t reel in impressive Ghaiyyath at Sandown 17:01
Valtteri Bottas takes Austrian Grand Prix as Lewis Hamilton is demoted to fourth 16:22

1 Monica Seles: The warrior queen who could have been the best ever
2 Donnacha O’Brien takes first Classic as Fancy Blue wins French Oaks
3 Marcus Rashford ‘blessed’ to be fit again and back in the goals
4 Valtteri Bottas takes Austrian Grand Prix as Lewis Hamilton is demoted to fourth
5 Séamus Power huffs and puffs as Wolff blows the door down in Detroit
Real news has value SUBSCRIBE