Seán Moran: GAA get to grips with whether 2020 season has a future 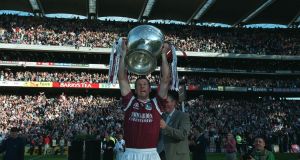 Gary Fahy of Galway lifts the Sam Maguire in 2001, the year when the GAA had to cope with the disruption caused by the foot-and-mouth crisis. Photograph: Andrew Paton/Inpho

Former DG Páraic Duffy’s reminiscences on Tuesday about the impact of foot-and-mouth disease on the 2001 season was a reminder that the GAA have certain advantages when it comes to coping with widespread disruption.

As amateur sports, Gaelic games can shuffle around fixtures and competitions to suit themselves without worrying about contracts and loss of earnings for players. There are no international tournaments, requiring dovetailing and representative seasons that have to accommodate other organisations.

So, 19 years ago counties were dumped out of some competitions and cut a bit of slack in others and no one complained; they just got on with it.

There may be no comparison between the gravity of what threatened back then, which was essentially the long-term economic interests of one sector, and the public health concerns driving the current crisis but the need for people to play their part is similar.

The tightening restrictions on social behaviour, announced on Tuesday, underline the reality that this promises to be a long haul. The GAA will readily observe revised directions, undertaking to suspend further its activities, call for compliance and hope that people keep well.

One element of GAA history with some relevance to the current predicament was recently highlighted by Michael Foley in the Sunday Times. It is that throughout its history and in a variety of dire landscapes, the association has virtually always completed its senior All-Ireland championships.

The one exception was 1888 when the ‘American Invasion’ took place – the fund raising scheme whereby Irish athletes would stage exhibitions and which could hardly have lost more money had it been an actual invasion of the US.

This perseverance has most relevance to the early years of the competitions. In the first 38 years of the GAA, of the 74 All-Ireland finals in football and hurling, 49 didn’t conclude until at least a year later and 18 took two years.

These delays were partly the teething pains of national administration and later the ravages of conflict as well as the 1918 pandemic flu that assailed the world in similar ways to the current coronavirus.

Most striking was the 1920 All-Ireland football championship that saw Dublin qualify for the final all of 19 months before the second semi-final between Mayo and eventual champions Tipperary (the last of their five titles) was played because of the turbulence of the War of Independence.

If the GAA is to get 2020 done, what models are available.

It is universally accepted that there will be no miraculous lifting of restrictions in time for the scheduled May start, as that would require teams to be back in training by mid-April.

Thereafter the questions are to do with likely resumption dates: beginning of June, July or August – or even beyond?

Whereas there is now a general acknowledgement that the leagues are beyond rescue, it remains to be seen how that will be managed. There had been earlier hopes that a couple of fixtures could be played to clarify promotion and relegation issues but now there is also a suggestion that this year’s leagues could simply be cryogenically frozen and restarted next January.

There would be obvious winners and losers in such a scenario – Carlow hurlers were relegated but neither Antrim nor Kerry have been promoted and Cork footballers are on the cusp of a quick departure from Division Three – but given the extraordinary circumstances, such a reset is not unreasonable and has already been undertaken in women’s football.

Although a consensus has developed that championship can revert to pure knock-out, it is understood that the GAA haven’t completely given up on the possibility of reverting to a more recent format with All-Ireland qualifiers included.

The thinking is that the qualifiers can proceed effectively in tandem with the provincial championships, trailing them by just a week or two, but the current experimental round-robin formats in the Leinster and Munster hurling championships and the All-Ireland football quarter-finals won’t be possible.

There is likely to be too much pressure from provincial councils to allow open-draw senior championships with Connacht and Ulster, unlike Leinster and Munster not having benefited from the lucrative round-robin hurling seasons in the past two years, likely to need the gate receipts.

Under-age inter-county championships may well proceed, as there are only four counties left in the under-20 football and the hurling is knockout format. As a developmental grade the football under-20 would be easier to accommodate during the summer than the hurling, which remains elite with players eligible for senior as well.

Perhaps a temporary ruling to make hurling developmental as well at this grade would be an idea were both under-20 and senior to be run off over a restricted period. Knockout minor championships would also be capable of organising in a short space of time.

Club schedules have also suffered from the suspension of activities and most are likely, similar to inter-county, to revert to knockout formats. A once-off solution of cancelling the 2020-21 provincial and All-Ireland championships and ending the club season at county finals would also ease pressure.

Finally, with the AFL season also at a standstill in Australia, there is a very real prospect of this year’s scheduled resumption of the International Rules series being called off. That would make it four years at least since the Tests were last played and intensify concerns for the hybrid game’s future.

1 Cian Healy: ‘Realistically I got away with murder when I was younger’
2 Robbie Henshaw likely to be the only Irish change for France finale
3 Rovers boss Bradley outlines Jack Byrne’s struggle with coronavirus
4 Bartomeu resigns and drops bombshell of Barcelona joining European Super League
5 Ireland's centre will hold thanks to Henshaw and Aki’s midfield muscle memory
Real news has value SUBSCRIBE