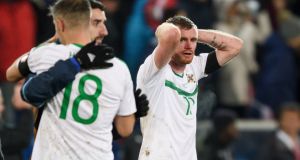 Northern Ireland’s Aaron Hughes, Gareth McAuley, Chris Brunt and Jamie Ward, all starters in Basel, could now contemplate international retirement, particularly if manager Michael O’Neill is lured away by either Scotland or a club side.

Following Sunday’s 0-0 draw with Switzerland, which was enough for the Swiss to win the play-off by virtue of the 1-0 first leg victory at Windsor Park, Northern Ireland miss out on their first World Cup since 1986 in heartbreaking fashion.

Following the game O’Neill explained; “I know it’s a difficult time and it will come for them and they will make considerations going forward, certainly the likes of Aaron and Gareth at 38 and 37, and Chris Brunt...these players that have had long and established Northern Ireland careers. But they have time to make that decision.

“Certainly at this minute in time (regarding his own future also), it’s not a decision, and I am not thinking any further ahead than just being with the players.”

His Northern Ireland side went down fighting at St Jakob-Park with energy, commitment and heart — all characteristics of O’Neill’s near six-year tenure.

Yet they could not rectify what happened at Windsor Park, when referee Ovidiu Hategan inexplicably gave that crucial first-leg penalty for a handball against Corry Evans that left O’Neill and his players dumbfounded.

It was Ricardo Rodriguez who converted the spot-kick at Windsor Park, and he was the man of the moment again three days on when he cleared Jonny Evans’ stoppage-time header off the line.

“Shafted is the only word to put it,” he said.

“I will think about the penalty decision for years to come as it’s the only goal between the two sides and it’s knocked us out. It’s disappointing that these decisions cost us a place in the World Cup.

“We were angered, upset and disappointed with what happened in Belfast.”

It was a bitter pill to swallow for O’Neill too, as he conducted his post-match press conference instead of presiding over an extra-time period.

“The cruelty is in the poorness of the decision,” he added.

“We’re missing out on the chance to go to the World Cup. We should still be playing extra-time now, that’s the reality.

“Over the two legs, for us to miss out off the nature of the decision and how it was given, is extremely cruel. At this level, for a group of players that deserve more...we should still be fighting for our place to go to Russia.

“The players are emotional and upset. There were some players in tears, everyone was struggling to hold back their emotions.

“For some of these players it’s unlikely that the World Cup will ever come round again. What we got from every single one was more than I could ask for.”