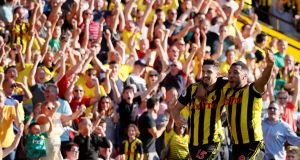 Mauricio Pochettino had banged the drum hard for concentration and focus. After the high point of last Monday’s 3-0 win at Manchester United, the Tottenham Hotspur manager was desperate for a follow-up success: no mistakes; a performance to demonstrate the mentality of champions.

Instead, it was Watford that drove a triumph to have Elton John, their former chairman and most famous fan, beaming widely in the posh seats and most of the Vicarage Road crowd in similar raptures.

It was Watford, rather than Tottenham, who maintained their 100 per cent start to the Premier League season and, for the first time since 1987, it was they who triumphed in this fixture.

After a forgettable first half, Tottenham had gone ahead courtesy of a freakish Abdoulaye Doucouré own goal, the midfielder inadvertently turning home Lucas Moura’s cross. At that point, Javi Gracia’s team had offered little but how they responded.

To Pochettino’s angst, the goals that prised the result from him and his team came from set-pieces and – more to the point – they were coloured by defensive breakdowns; the tiny margins that can be so crucial.

On both occasions, José Holebas’s deliveries were fiendish. The first was from a free-kick on the right and Troy Deeney, holding his ground strongly, angled a header inside the far corner.

The second came on a corner from the other side and, once again, Tottenham’s marking broke down. Mousa Dembélé was left with Craig Cathcart, the powerful centre-half, and he powered home the header. Watford’s best-ever start to a top-flight season goes on. For Tottenham, there was only frustration.

Pochettino had tweaked his tactics, starting with a 3-3-2-2 formation – aka the England World Cup system – but one constant was the presence of two strikers, with Lucas up alongside Harry Kane, the one-time Watford youth player.

Tactical flexibility is a Pochettino watchword and Lucas – a winger by trade – has shown it. His pace was a threat but Christian Kabasele was equal to it during an rare flicker of first-half excitement, tracking back as Lucas burst on to a Dele Alli pass. Kabasele leant into him to stifle the opportunity.

Tottenham were the more proactive team during a dull first half, with Alli the best bet to unlock the game. He was always looking to burst through Watford’s backline and, when he did so on 12 minutes, fastening on to a high Toby Alderweireld ball, he sent a looping header off target. Alli also threatened when Christian Eriksen whipped in a cross following a short free-kick routine. He touched wide only for an offside flag to spare him.

There was just one shot on target before the interval and it said everything that it was a tame pea-roller from the Watford captain, Deeney, in stoppage-time. Like Pochettino, Gracia had gone with two strikers, Andre Gray partnering Deeney, and the latter headed over from Daryl Janmaat’s cross in the 19th minute.

Watford struggled to move the ball with any zip for long periods and they seemed happy while it was goalless. Ben Foster was whistled by the Tottenham fans behind his goal on 50 minutes for holding on to the ball for too long and that felt reflective of Watford’s ambitions.

he breakthrough came shortly afterwards and, if Doucouré was the obvious villain, Kabasele was also blameworthy. The otherwise impressive central defender failed to get any distance on a clearing header, finding only Lucas on the right, after Alli’s chip into the box.

What followed seemed to unfold in slow motion. Lucas’s cross was cut slightly backwards of square; it thumped into Doucouré and spun inside the near post, agonisingly out of the reach of Foster.

Watford had offered precious little and yet they roused themselves spectacularly, igniting the atmosphere in the process. Gray snatched at an opening on the edge of the area and, after Kabasele had cut out a low Kane cross at the other end with Lucas in space behind him, Watford thought they had equalised.

Deeney won a shuddering shoulder-to-shoulder challenge with Davinson Sánchez and, when he crossed, Alderweireld’s diving header back towards his own goal beat Michel Vorm only to come back off the top of the far post.

Watford sensed opportunity and it would come from Holebas’s set-pieces. After both goals, the left-back sank to his knees in celebration. Tottenham almost snatched a draw at the death when Kane hung in the air to meet Kieran Trippier’s cross but he headed high. It was not Kane’s day. Nor was it Tottenham’s. – Guardian service