Manchester United get back on track against Burnley 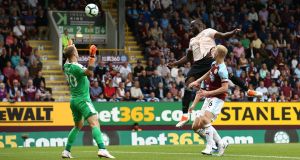 For the second time in a week the final whistle was Jose Mourinho’s cue to head directly and pointedly to the Manchester United supporters congregated to his left. He gave them his coat, he gave them his water bottle and, most importantly of all, he gave them what his team could not at Old Trafford on Monday; victory. It was the only offering that mattered for the United manager at Turf Moor.

Romelu Lukaku struck twice to condemn Burnley to deserved defeat and spark the post-match reaction from Mourinho that he recently claimed was not his style. United were superior in all departments and strong in their response to the 3-0 home defeat by Tottenham Hotspur but there was unnecessary drama en route to three points, Marcus Rashford received a straight red card within ten minutes of his introduction for pressing his head into Phil Bardsley and Paul Pogba saw a penalty kick saved by Joe Hart. After the events of recent weeks, Mourinho will consider them minor indiscretions.

The only sound during a respectfully observed minute’s silence for Jimmy McIlroy, the late Burnley legend whose funeral was held at Turf Moor on Friday, was the drone of a plane circling overhead. “Ed Woodward a specialist in failure” proclaimed the banner trailing behind it, the protest paid for by a United supporters’ group called “A Voice from the Terrace”. The voice from the away section at Burnley was loud and unified as the travelling support chanted Mourinho’s name throughout.

United’s manager acknowledged the welcome show of support, although even his most ardent admirers must find it bewildering that a coach who has enjoyed so much success from a solid, defensive base has a centre-half pairing of Chris Smalling and Victor Lindelof in his third season at the club. Of course it would have been different had Mourinho got his wish for a new central defender in the summer but, with Lindelof and substitute Eric Bailly bought on his watch, the blame cannot be pinned entirely on United’s vice-chairman.

Fortunately for those wearing garish pink, Burnley lacked the pace and quality to stretch the United defence as Tottenham Hotspur did at Old Trafford on Monday. In Romelu Lukaku and the often peripheral Alexis Sanchez, the visitors also had the strength and ingenuity respectively to continue Burnley’s difficult start to the new campaign.

Sean Dyche made four changes to the team that exited the Europa League at the play-off stage against Olympiakos on Thursday. The search for fresh energy and the defensive discipline of last season was a fruitless one, however. Burnley have not won a game inside 90 minutes since April, a sequence that now stands at 15 matches, and they were on the back foot from the first whistle here as United controlled possession and the tempo of the contest with ease. Jesse Lingard had three shots at Joe Hart’s goal in the opening ten minutes alone but was unable to find the target with any. Burnley’s reprieve only ever felt temporary.

Sanchez has struggled to justify United’s heavy investment so far but showed at Turf Moor what an influential figure he can and should be for Mourinho’s team with a commanding display on the left. The breakthrough stemmed from a delightful cross by the Chile international who, collecting Luke Shaw’s pass outside the Burnley penalty area, swept the ball with the outside of a boot over the head of Ben Mee. Lukaku, taking a crucial step away from the Burnley defender, was perfectly placed to beat Hart with a powerful close range header.

Lukaku almost doubled United’s lead minutes later following an incisive one-two with Sanchez but the former Manchester City goalkeeper produced a fine save to thwart the Belgium international. The striker did get his second of the game, and third of the season, when fortune favoured the visitors on the stroke of half-time. United can argue they merited the break after a fine flowing move saw Shaw and Sanchez link up once again to find Lukaku in the box. Lukaku teed up Lingard for a shot that struck Charlie Taylor, rebounded off the head of Ashley Westwood and dropped perfectly for the number nine to sweep under Hart.

United were comfortable without illuminating Turf Moor. This was a victory built on industry and flashes of inspiration from Sanchez rather than a great leap forward in performance, although the margin of success should have been far greater. The visitors were awarded a penalty for Aaron Lennon’s clumsy challenge on Rashford as the substitute attempted to turn inside the area. Paul Pogba approached the spot-kick with a slow, hesitant run but his effort was telegraphed for Hart who saved comfortably to his right. The routine looks cool when it ends with a penalty converted; self-indulgent when it is not.

Composure deserted United in the minutes that followed, not least Rashford who invited his red card by foolishly pressing his forehead into Phil Bardsley having been fouled by the Burnley right-back. The former United defender was undoubtedly the instigator of the flare-up, kicking out at the young striker off the pitch, but Rashford gave referee Jon Moss no option but to reach for red. He had been on the pitch for only ten minutes.

Hart had a fine game against his old Manchester rivals and Lukaku in particular. The England international foiled the £90m forward again after he had brushed aside Mee to power into the penalty area. Lukaku also escaped both Mee and Hart only to be caught by the defender’s covering challenge, and a possible push, but, two late headers from Sam Vokes apart, United eased to an eventful, crucial and potentially restorative win.