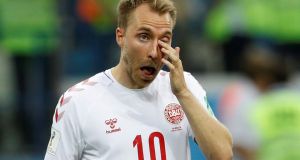 Christian Eriksen: “We have to solve this conflict now, not just keep digging the ditches deeper.” File photograph: Getty Images

The Our Story section of the Jægersborg Boldklub Facebook page is due an update after four members of its futsal team were called into the Danish senior squad for Wednesday’s friendly against Slovakia.

But the volunteers behind it might well be waiting to see what happens next in Bratislava. Everybody else in Denmark certainly is.

The nation’s established stars again called on the country’s association (DBU) to take a step back and allow them play this week’s two games – the Slovakia friendly and the more important Nations League game against Wales on Sunday. The players have asked to play under the terms of their now expired agreement on commercial rights and so allow another month for negotiations to resume on a new one, but the federation’s officials seem determined to up the ante.

Euro’92 hero John Jensen was drafted in to take charge of a cobbled together squad that includes players from the third and fourth tiers of the Danish club game as well as seven futsal internationals. Some of those also play 11-a-side football to a moderately high standard, but others do not. A week ago the four from Jægersborg were playing in the final round of qualifying for this season futsal Champions League. They lost.

Being able to unveil Jensen must have been something of a relief for the federation, but it was not one the organisation’s better days. As supporters continue to wonder whether some sort of last-minute deal might be brokered to allow the game in Slovakia to go ahead, the DBU revealed that an alternative squad of 24 players was already on its way. It said they would be named later and would not be speaking to the media “as they want to focus on the match”.

One or two names have become known but it was the Slovaks who eventually made a list of 23 players public. There are no household names among them and many Danes seem to be hoping that, now that their federation has met its obligations by sending a team, the hosts opt to cancel the game so that the team never has to take the field.

“I feel very, very strongly about the national team as an institution. And because of that I think the most important thing must be that the games will be played,” said Jensen. “I just hope to help us get through the two matches and that the parties find a solution . . . I hope my contribution can help mitigate the negative consequences.”

It was not immediately clear how Jensen’s intervention has gone down with the country’s current crop of stars. But it is unlikely to win him friends. Thomas Delaney acknowledged the solidarity shown by Danish players in the top two tiers of the country’s league, all of whom declined to be called up. In their circumstance, he said, the DBU had “scraped together what they could”.

His union committee member and team-mate Christian Eriksen issued one of many calls for the old deal to be extended and the regular team to be deployed. “We have to solve this conflict now, not just keep digging the ditches deeper,” he said.

Many believe that whatever happens in Bratislava a deal will be struck to ensure the Nations League game is not affected. This occurred last year when a dispute involving the women’s team was resolved after one game and four later they went to Croatia and won 4-0. For the moment, though, the DBU, which is currently staging its games in Aarhus because it does not want to meet FC Copenhagen’s financial demands for playing international matches there, continues to take a tough line.

Uefa, meanwhile, is taking no line at all, at least in public.

3 Ireland v France in doubt due to hotel quarantine policy