After two years in the widerness, Mark Hughes may give FA Cup start against Coventry City 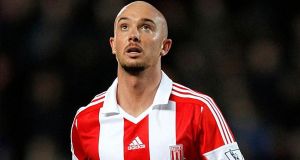 Stoke gave Ireland a six-month deal in the summer when his four-year €16m contract expired, and another one in December to take him through to the season's end.

It could just be the latest brainwave of the competition’s marketing department – you know how they are always trying to breathe new life into the FA Cup – but it appears that Stephen Ireland may make his first competitive appearance for Stoke City in nearly two years when Mark Hughes takes his side to Coventry for their third round tie over the weekend.

If it is a stunt the FA Cup may be on a winner: things are rarely dull when the now 31-year-old is given centre stage.

Once the “next big thing” for Ireland, the midfielder’s international career crashed and burned over what came to be known as “grannygate” a decade ago.

Steve Staunton had, it seemed, wanted to build his team around a player who was technically gifted and possessed a great eye for a pass and a good one for goal. Yet Ireland never settled in the squad, and whatever the rights and wrongs of the situation as he perceived it, he ultimately bailed while on a September 2007 trip to Slovakia.

This damaged his manager, a struggling international novice at that stage who didn’t have the silver tongue to charm his way out of a tight corner, as it involved the shambolic departure of one of his best players.

Yet back at club Ireland continued to impress, and he was Manchester City’s Player of the Year for 2008/09, something that now seems almost unthinkable given the very different journeys Ireland and the club have made in the years since.

There is little question that the midfielder has been unlucky with injuries, sometimes desperately so, but it is hard to resist the notion that over the longer term his greatest affliction has been an unshakeable dose of foot-in-mouth disease.

Certainly it would be easier to have sympathy about how Ireland’s career came off the rails so many times were it not for the manner in which he attracts publicity.

He alienated Brian Kerr at youth level and would later mock Giovanni Trapattoni after the two men met with a view to facilitating his return to the senior international set-up.

His parting shot to City was the observation that the club’s new stars were obsessed with money – this as the move he made to Aston Villa as a makeweight in a deal for James Milner was held up by his demand for a £2 million pay-off; half of which he is reported to have secured.

That was in August of 2010, and by the following January he was for sale again after having failed to impress Gerard Houllier. He would get a second chance under Alex McLeish, whose patience he still tested when he appeared in the tabloids smoking a shisha pipe, but Paul Lambert’s appointment marked the beginning of the end.

Remembering all the ability he had shown then they had worked together in the early years at City, Mark Hughes brought him to Stoke, and Ireland easily did enough to merit his initial loan move being made permanent. He announced that, at 27, he needed to be playing “week in, week out”. It has not worked out that way.

He has now spent the best part of two years working on his rehabilitation from a particularly bad double leg fracture sustained on a training pitch on May 10th, 2016, but he was scarcely a central figure at that stage.

His last start in the Premier League had been back in April of the previous year, and while he did manage 18 league appearances from the bench over the course of 2015/16, less than half came in the second half of the season and four of the last five were of less than 10 minutes.

“He probably won’t thank me for saying – but Stoke City probably haven’t seen the best Stephen Ireland,” confided Hughes’s assistant Mark Bowen to Radio Stoke in what seemed an impressive opening salvo in the battle for understatement of 2018.

“When we had him back at Manchester City he was player of the season two years in a row,” he continued, although that is not what the records show, with Richard Dunne having won the official award, as voted for by members of the supporters’ club, four times in a row before Ireland’s one win in 2009.

“He’s a fabulous player, and he’s been unlucky with injuries since he’s come to this club. He’s been out for 18 months, almost two years, but he’s shown fantastic professionalism to get back.”

This last bit certainly seems to be true given the seriousness of the injury, and Hughes has been very supportive as Ireland worked his way back. Hughes gave the Corkman a six-month deal in the summer when his four-year estimated €16 million contract expired, and another one in December to take him through to the end of the season.

To date Hughes has had little enough return on the faith he has invested in the player, and Stoke have not, if those reports of his earnings are correct, had anything near their money’s worth.

Yet Ireland has talent, there’s no doubt about it, and with an awful lot to play for as he approaches the summer and what will almost certainly be the last significant contract of his career, the Ricoh Arena in Coventry might just be the place he starts reminding us of just how good he really can be.