Antonio Conte thanks Chelsea fans for show of support 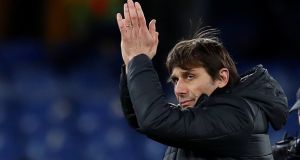 Antonio Conte thanked Chelsea’s supporters for their backing after his team returned to form during Monday’s 3-0 defeat of West Brom.

The Italian’s future at Stamford Bridge remains the subject of speculation less than a year after he led them to the Premier League title that Manchester City this season look certain to win, contributing to his criticism of the club’s transfer policy.

That they produced an improved performance following successive, damaging defeats by Bournemouth and Watford and Eden Hazard again excelled with two goals either side of Victor Moses’ second-half finish also gave them renewed focus in addition to taking them above rivals Tottenham and up to fourth.

Their three goals were followed by chants of support from the club’s fans for Conte, and the 48-year-old said: “I have to thank the fans. They showed me great support because they are reading speculation and rumours about me. I’m grateful to the fans for supporting me in this way.

“It means that, maybe in our 18 months together, they understand my passion and my will to defend these colours, this shirt, this badge.

“I repeat: me and the players are trying to do our best to give them the best satisfaction. Sometimes we can do this, sometimes not, but the will is always present.”

Defeat means West Brom remain bottom of the Premier League, seven points adrift of safety and five behind 19th-placed Stoke, the club closest to them, with only 11 games to play.

The fact they are increasingly likely to be relegated was worsened by the loss of Daniel Sturridge to a hamstring injury in only the fourth minute.

“He was distraught. The way he’s worked at our place has been of the highest order. He’s absolutely devastated because he wants this period to be a success.”

They next head to Spain for some warm-weather training, and Pardew added: “Some sun on our backs; a bit of resolve. The only people who are going to believe we can (survive) is ourselves. A bit of that, a bit of team building and a lot of hard work as well.”