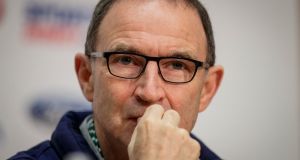 A big win would quickly take the attention off Martin O’Neill. Photograph: Inpho

Having lamented the lack of competitive action when he first got the job, Martin O’Neill could probably do without an eight month lay-off until the start of the Nations League right now.

The fallout from the Denmark defeat was bad enough but after the week of ‘Will he, won’t he?’ with Stoke City, the 65 year-old would probably welcome the focus provided by a qualifying game of some sort.

It would be interesting to know what most of his players made of it all. Richie Sadlier, in this paper, suggested that he will have been critically undermined within the dressing room by his obvious interest in at least hearing what a Premier League club had to offer. While another, Stephen Elliott, reckons that the squad will see it as just another part of the job and that those selected will be happy enough to play for him.

If social media is anything to go by his standing amongst supporters has taken quite a hit and the FAI can hardly be happy with the way the week went but everyone’s outlook would probably change in the event that the team had big games coming up and made a strong start to a new campaign.

Instead, there are a couple of friendlies currently lined up between now and September at which stage the team will get its first taste of a convoluted competition in which there will be no standout top or bottom seeds and where the real significance of the results may not be known for more than a year, when the regular Euro2020 qualifying campaign is actually out of the way.

Whether O’Neill will still be around by then is, it seems, anybody’s guess. When he announced to a press conference in October that he had agreed a new deal in principle with John Delaney it was generally taken as read but now the suggestion is that not that verbal agreement but his actual written contracts allow him to speak to Premier League clubs about other opportunities. If true, it is a remarkable position for the association to have put itself in.

Whether we will ever learn the finer detail of what really unfolded with Stoke remains to be seen but the notion, put forward by the one journalist he appears to be communicating with, Luke Edwards in the Daily Telegraph, that after the situation dragged on for a week, O’Neill was still swayed by the commitment that he had given to John Delaney more than two months ago seems, well, surprising.

And the scale of the hurt the 65 year-old is said to have felt over the criticism of the 5-1 defeat by Denmark is odd too. There are undoubtedly elements of the media that like to weigh in a little too colourfully in these situations but the suggestion is that he was stunned by the vitriol with the use of terms like “failure” or “humiliation” cited.

Surely not? This was, after all, Ireland’s second worst home defeat ever; the only heavier one having been inflicted in a qualifier for the 2014 World Cup by the team that would go on to win the competition. With all due respect to a Denmark, they were, as O’Neill said afterwards, technically better than their hosts and had one more world class player, but they are unlikely to come remotely close to matching that achievement next summer in Russia.

The northerner is also said to be “excited” about the prospect of bringing through a new generation of players that will reshape this Irish team. It will certainly be a challenge.

To date, O’Neill has handed senior international debuts to 16 players, just one of whom, Shane Duffy, has become a real mainstay of the team. Harry Arter looks well on the way to becoming a regular first choice while Cyrus Christie has started games in Seamus Coleman’s absence but nobody else really has completely convinced so far that they can immediately improve the team. And that is the task.

The outcomes in both of the campaigns overseen by O’Neill have essentially been good enough, if replicated, to get Ireland to the next European Championships and, having turned a profit of €4.5 million on the last one, that is pretty much all the FAI will care about. The play-off place through which O’Neill’s side made it to France, though, will now be allocated via the Nations League and so the path to the finals may be rather different and the team needs to take the new tournament seriously.

O’Neill has a few months and a handful of games to start any reshaping of his team before it starts. If he succeeds, it won’t matter much what his media critics think and the bulk of the fans will be back onside. If not, it might have been better for all concerned had he left for Stoke and made way for someone who might see the job as a dream come true and not just the best available option.

1 Sideline Cut: Vignette shows why Bird is the true shark in The Last Dance
2 Farrell and O’Connell provide insight into changes in Ireland’s analysis
3 Anfield and Cheltenham show sports again lacking in looking after their own
4 Andrew Porter diary: Meat, veg and intermittent fasting the order of the day
5 Dr Bob Rotella: ‘If you focus only on the target you’ll play darn good golf’
Real news has value SUBSCRIBE
Crossword Get access to over 6,000 interactive crosswords