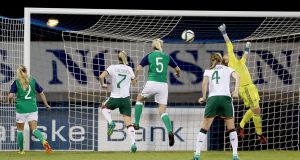 In a first competitive meeting between the cross-border rivals since 1995, it took a masterclass from the returning Megan Campbell to get the Republic of Ireland’s 2019 World Cup quest up and running.

Ireland were required to be patient at Mourneview Park and eventually edged ahead in stoppage time at the end of the first half through a Rachel Furness own-goal.

Manchester City defender Campbell had forced the mistake - from one of her trademark throw-ins - for the first goal, and she grabbed a stunning second herself after 69 minutes.

The three points sets Ireland up nicely for their next assignment on October 24th away to a Slovakian side hammered 6-1 by Norway in Tuesday’s other Group three game.

Since Colin Bell was appointed to the post in February, his priority has been to make the side defensively solid. Three wins in seven games before this victory might not have set the world alight, but the feat of keeping five sheets indicated his plan was gathering pace.

Imposing a shape to his backline was again at the core of the Englishman’s game-plan, even against a side situated 27 places behind them in the world rankings, with Niamh Fahey on occasions dropping deeper from her sitting midfield role to create a five-player unit.

The ploy was designed to curb the impact of Rachel Furness, the Reading attacker whose goal six years ago helped produce the biggest win in the history of Northern Ireland women’s football against then world champions Norway.

Such highlights have been rare for the North since but they succeeded in limiting their visitors to such an extent that the set-piece expertise of left-back Campbell was their primary attacking outlet.

Her powerful throw-in first came to the Irish public’s attention back in 2014 when both of Ireland’s goals against European champions Germany were sourced through it.

Manchester City’s fans, too, have witnessed the catapults, most prominently in their FA Cup final win only five months ago.

Her absence from the squad in the last campaign was sorely missed, as injury kept her out of six qualifiers, and the Drogheda native illustrated her importance to the cause with a telling contribution on Tuesday.

And so, Campbell’s feet, as well as her hands, were utilised to lethal effect during a first half the visitors completely dominated.

A couple of her left-wing deliveries early on didn’t get the desired connection from one of her teammates but, from a short-corner well worked with Katie McCabe on 19 minutes, Diane Caldwell got there first only to head over from six yards.

A Northern Ireland defence which conceded 22 goals in their last campaign were beginning to look shaky and they needed Julie Nelson’s last-ditch block to prevent Stephanie Roche slotting home from close-range on the half hour mark.

Three minutes later, they were unable to stop the Sunderland striker rising high to meet Campbell’s throw-in but they were saved by the effort rebounding off the crossbar.

Ireland were probing further, and six minutes before the break, Caldwell somehow nodded the ball out from under the crossbar after teenage goalkeeper Lauren Perry fumbled Louise Quinn’s header into her path.

For all of Ireland’s pressure, they were almost caught out from Northern Ireland’s first corner on 41 minutes. Kendra McMullan wriggled free to direct a rising header which Marie Hourihan, on her competitive debut, managed to tip over.

It would prove a brief reprieve for the home side as the inevitable breakthrough arrived down the other end.

Campbell’s throw-ins were becoming more of a menace and from a particularly wicked version into the six yard box, Furness glanced a header into her own goal.

There was little offered in the second half from the hosts by way of response and another goal by the Republic, from Campbell’s ferocious drive from 30 yards into the far corner, underlined their supremacy and secured the win.

1 Ireland suffer Twickenham torture yet again as England dominate
2 England 24 Ireland 12: How the Irish players rated at Twickenham
3 TV View: Sunday Bloody Sunday . . . Not Bono’s fault but Boy, that was Bad
4 England held all the aces in defining battle of the breakdown
5 Mayo left licking their wounds as Monaghan roll on
Real news has value SUBSCRIBE
Crossword Get access to over 6,000 interactive crosswords