Romelu Lukaku song: ‘Banter’ or not, racial stereotyping is racist 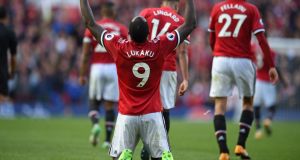 Romelu Lukaku has scored six goals for Manchester United since joining from Everton in the summer. Photograph: Oli Scarff/Afp

And so to some Manchester United fans’ chants about their striker Romelu Lukaku, which a totally encouraging number of people simply cannot see are racist. To be super-clear (and apologies to those who realised this in 1964 or whenever): any assumption about someone made solely on the basis of that person’s race is racist. It may also be banter – but it is racist banter. And if anyone’s still struggling with the logical underpinnings of that incredibly simple rule of thumb, we’ll be diving deeper into why in a minute.

For now, Kick It Out have written to Manchester United asking them to act on the Lukaku chants, explaining: “Racist stereotypes are never acceptable in football or wider society, irrespective of showing support for a player.” In 2014, a YouGov analysis of Manchester United and Manchester City fans asked the two groups to describe themselves from a list of over 200 personality traits. With United fans, the one that came out top was “adaptable”. So do let’s hope they’ll swiftly adapt to not singing songs about Lukaku’s cock size.

Hang on – before we continue, I should stress: not all Manchester United fans. An unquantified minority of Manchester United fans. A minority who have almost without doubt completely lost their shit in the past if anyone tried to stereotype them in some way. As troublemakers, say, or people who live in Surrey. Yes, it’s a particular irony that those voicing distaste about the Lukaku chant are now being accused of oversensitivity by a certain strand of quick-to-temper football fans, who absolutely cannot stand to be generalised about themselves in any way. I mean, they really wet their pants about it.

If it relates to their own tribe, there are few more sensitive and chippy policers of language than some football fans. Fire up the internet and start anything other than the most positive sentence with the words “All fans of X club are” and you would be accused of appalling bias, hatred of the club, laziness, and a variety of unprintables besides. It is absolutely right that phrases like “a section of fans” and “a minority of fans” appear in news reports relating to the less savoury incidents that occasionally attend the game. But I sometimes feel they need to feature in special highlighted type in case arguably the most oversensitive group in society thinks someone’s accusing them, personally, of whatever it is. Not all United fans. Not all Chelsea fans. Not all England fans. Not all men.

What’s the likelihood the only stereotype those people hold about black people is that they have enormous penises? Zero

But back to Lukaku, and this one-eyed notion that stereotyping someone in a manner perceived to be complimentary is somehow problem-free. As huge amounts of psychological research has found, the trouble with supposedly positive stereotypes is that they tend to be accompanied in the minds of those who hold them by distinctly less complimentary ones. Time and again research papers have showed you couldn’t have one without the other: people who saw Asians as great at maths also thought they were cold and remote, and terrible drivers. If we may boil this tendency down to a racist drama in three sentences: Why is it racist to say Jews are careful with their money? It’s a compliment, for God’s sake. Bloody hell, trust the Jews to find something to complain about.

And so with the Lukaku chant. I’m afraid we have to ask ourselves something about those Manchester United fans chanting their great big compliment at Lukaku: what’s the likelihood that the only stereotype those people hold about black people is that they have enormous penises? Honestly, what are the chances? Zero, is the answer to that, whether or not they even realise it.

This is why it is so unreasonable to expect people to laugh along with what may seem to those indulging in it to be “just banter” – be they the subject of the chant himself, or other black people who hear it or hear of it. Not all of them may declare they have a problem with it, but the ones who do have a very real and serious problem with it. Why should they be expected to laugh gratefully as you tell them they have a huge penis, when inside they may be well aware that you also probably think they’re lazy and more predisposed to criminal behaviour?

Obviously, this questionably complimentary stereotyping isn’t restricted to race. It may come as a shock to the system for men given to paying a certain type of compliment, but when women heard men praise them for conforming to one positive stereotype – being ladylike, for instance, or nurturing - they stated that they were more likely to think the man also held negative stereotypes about them. And why wouldn’t he? He’s a stereotyper. Stands to reason he does it both ways. He may not be saying them out loud. But they’re there.

Just as they are with Lukaku. Prejudice masquerading as praise may appear superficially more appealing than prejudice without disguise. But only superficially.

1 Nicholas Quinn: ‘Swimming became how I dealt with grief’
2 Reality Bites – Tales from the new normal: Caitríona Cormican
3 James McClean still failing to learn his own online history lesson
4 A beautiful, happy accident - Moneyball is the best sports movie ever
5 Ian McKinley: ‘You do take for granted the simple things in life’
Real news has value SUBSCRIBE