Philippe Coutinho has no plans to join Barcelona next summer 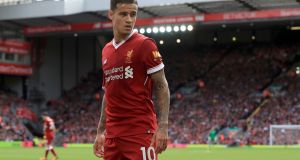 Liverpool’s Philippe Coutinho: “Liverpool is a great club worldwide. I’m here and I will give my best as always.” Photograph: Peter Byrne/PA Wire

Philippe Coutinho has claimed he has no agreement to join Barcelona next summer and is committed to the Liverpool cause this season despite being denied a move to the Spanish giants.

Coutinho made his first start of the campaign for Jürgen Klopp’s team on Saturday when he played 79 minutes of the 1-1 draw with Burnley. The Brazil international, given a rousing reception when he returned as a substitute against Sevilla in midweek, was the subject of three failed bids from Barcelona during the summer transfer window and submitted a transfer request in an attempt to force a move from Anfield.

Liverpool refused to consider selling the 25-year-old even when Barcelona’s third offer increased to a deal worth £119 million (€135 million) and, speaking to ESPN Brazil after Saturday’s game, Coutinho discussed “a complicated month” for the first time.

“What happened was a job offer and, in life, sometimes you get interested; sometimes you don’t and, in my case, everyone knows that I got interested, my family too,” the Liverpool player admitted.

“As I have always said, it is a great offer to receive an offer from such a great club like that. But it is also a great honour being here. Liverpool is a great club worldwide. I’m here and I will give my best as always.

“It was a complicated month for me but as I have said, it is an honour to receive that offer but it is also an honour to wear this shirt, so what I can do is work hard and honour that on the field. It is all cool. I’m working hard, my thoughts are on the team’s goals, making a good season, with the national team too, doing my best to get there.”

Liverpool declined to sell Luis Suárez in 2013 before, having been repaid by an outstanding campaign from the Uruguay international, allowing him to join Barcelona for £75 million (€85 million) the following summer. When asked if he expected to follow Suárez to Camp Nou next year, Coutinho replied: “Not that I know of.”

He added: “I am in a place that I have always been given respect by everyone and I too respect everyone. I have conquered my space in four, five years and never had any problems with anyone – the fans, the board, my team-mates, the coaching staff. That has not changed. As I have said, in life, in every job you get an offer, interested or not. It is all in the past.”

Meanwhile, defensive errors had been the hot topic at Liverpool all week and another misunderstanding in the back four on Saturday allowed Scott Arfield to smash home a half-volley after Joel Matip and Ragnar Klavan failed to deal with Robbie Brady’s looping header into the penalty area.

The one real bright spot for Liverpool was the performance of summer signing Mohamed Salah, who scored his fifth of the season and his fourth in a row at Anfield soon after. Guardian Service