Isco, Benzema, Ronaldo and Casemiro all on the scoresheet in 5-0 win at the Bernabeu 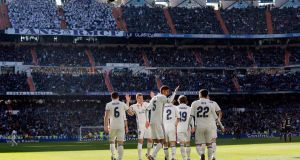 Real Madrid’s players celebrate the opening goal against Granada scored by Isco during the La Liga clash at the Santiago Bernabeu. Photo: EPA

Real Madrid equalled Barcelona’s Spanish record of 39 games unbeaten in all competitions with a comfortable 5-0 LaLiga victory over Granada at the Bernabeu.

Los Blancos had ended Barcelona’s record-breaking run last season with a 2-1 win at the Nou Camp and have not been beaten since going down 2-0 to Wolfsburg in the first leg of their Champions League quarter-final last April.

Isco hit a brace, with Karim Benzema, Cristiano Ronaldo and Casemiro also on the scoresheet against struggling Granada as Madrid moved six points clear at the top of the table.

Real enjoyed plenty of early possession as they kept Granada pinned in their own half and created their first real opportunity of the game after six minutes.

Marcelo found himself with time and space down the left and sent over a cross to the far post that just drifted beyond the reach of Benzema but the loose ball fell to Dani Carvajal, who cut back inside onto his left foot and curled just wide.

Madrid continued to pile forward. Another cross from Marcelo caused problems in the Granada box and after Ronaldo’s header fell into the path of Carvajal, his sliced shot was blocked by the defence before Marcelo fired over.

And the goal that Real had been threatening eventually came in the 12th minute when Casemiro played in Benzema and he quickly slotted the ball into the path of Isco, who kept his composure to fire past Guillermo Ochoa.

Benzema sliced a shot wide before the hosts doubled their advantage in the 20th minute as Luka Modric was afforded far too much time and space and his low shot was kept out by Ochoa but he could only parry it into the path of Benzema, who tapped home.

Ronaldo made it three seven minutes later after Marcelo turned Triguero Tito inside out down the left channel and chipped over an inviting cross that was easily headed home by the Portugal international.

Madrid continued to pile forward as Nacho burst into the box and pulled back a dangerous cross that found its way to Benzema, who laid it off to Carvajal but his shot was easily stopped by an overworked Ochoa.

But Real were not to be denied and moments later they did make it four as Modric burst down the right channel and his cross across the face of goal was met at the far post by Isco in the 31st minute.

Ochoa then denied Isco a hat-trick with a fine save low to his right after Benzema had picked him out.

Th goalkeeper was called into action early in the second half to deny Benzema from the edge of the box and Isco headed wide from a Carvajal cross.

Casemiro got the fifth in the 58th minute after a whipped free-kick from James Rodriguez found its way to the far post for Casemiro to slot home his first goal of the season from close range.

Rodriguez curled a free-kick narrowly wide as Madrid started to sit deeper late in the game but were untroubled by the visitors.