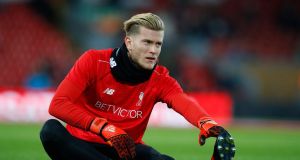 Loris Karius may get a chance to restart his Liverpool career in their FA Cup clash with Preston North End. Photo: Getty Images

Loris Karius gets the chance to re-start his Liverpool career this weekend after manager Jurgen Klopp admits he was forced to take the goalkeeper out of the firing line because of the intense scrutiny he was under.

The 23-year-old summer signing replaced Simon Mignolet as first-choice in late September but after 10 unconvincing Premier League matches he was dropped after being criticised for mistakes in the 4-3 defeat at Bournemouth and 2-2 draw at home to West Ham.

Mignolet’s return saw him produce a good performance in the draw at Sunderland – beaten only by two penalties — but Karius will be back in the side for the FA Cup third round visit of League Two Plymouth.

“Big chance,” Klopp when asked about the chances of his fellow German playing on Sunday.

“He trained outstandingly, which was good to see. It is difficult to speak about these things in public because you make it a big story and that is part of the problem.

“But we cannot ignore the pressure you (media) make. We have to cope with it and deal with it and that is why we made the change.

“I am sure Loris will benefit from this step back or step aside. It was good for him.

“Simon has done an outstandingly good job since he has been playing again and Loris has forced him to train at the highest level because we have two really good goalkeepers.”

Another player guaranteed a start on Sunday is Joe Gomez, who has yet to feature in Klopp’s first team after sustaining a serious knee injury while on England Under-21 duty days after the German took over in October 2015.

There will be a number of other changes, with youngsters to be given a chance as senior players are rested after a hectic festive period.

“It will be his first game for a long time,” Klopp said of Gomez.

“It is the next step on a long way to go. He has already had a long way but everything is good.

“It is nice for all of us because we are really happy for him. He is fit now.”

Part of the reason for making significant changes this weekend is the fact Liverpool have the first leg of their EFL Cup semi-final against Southampton at St Mary’s on Wednesday.

Liverpool are now fighting for trophies on three fronts, as they also trail Chelsea by five points in the Premier League title race, but Klopp admits even he has doubts as to whether they can win them all.

“I know what would be the maximum success of course but I am not sure we can do it,” he said.

“We will work to make it a little bit more likely. We know more about us.

“At the start of the season it was imagination — we thought it could work and now we know it can work.

“Forty-four points after 20 games is a good number. Obviously the second-best in the league so that is absolutely more than okay.

“But it is only the base for the rest of the season and we have to keep on going.”

Jadon Sancho ruled out of Champions League clash with Man City 14:51
Draws for provincial championships spread over two days 13:42
Warren Gatland: It’s nothing to do with ‘do I feel the need to have an English coach?’ 13:29
Full kick-off details announced for opening rounds of Pro14 Rainbow Cup 13:15
Florentino Perez re-elected as Real Madrid president 12:40