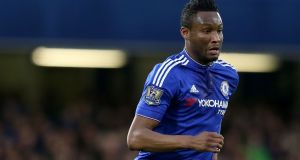 Midfielder John Obi Mikel has announced he is to leave Chelsea and join Chinese Super League side Tianjin TEDA.

Mikel won 11 trophies with Chelsea during a spell at the club which consisted of 374 appearances.

“To play in the Premier League, the best league in the world, is every professional player’s ambition,” the 29-year-old added.

“But to play for Chelsea, to become part of the Chelsea family, to work with some of the best managers and players in the world, has truly been an honour.

“To everyone at Chelsea — goodbye, and thank you. You will always be part of who I am, and I wish you the best of luck.

“I could not be happier to be saying goodbye with the club back where it belongs — top of the league.”

Former Manchester United and Manchester City striker Tevez is reportedly set to earn £615,000-a-week at Shanghai Shenhua, making him the highest paid player in the world.

Cristiano Ronaldo’s agent also claimed last month that Real Madrid were offered €300million for the Portugal skipper by an unnamed Chinese Super League club, but said his client had no interest in the deal.

However, with China now becoming a more popular destination for top players, the Chinese government is reportedly attempting to impose restrictions on the big spending.

In quotes run in several national newspapers, a government spokesman accused clubs of “burning money” on new players and said it “would regulate and restrain high-priced signings, and impose reasonable restrictions on players’ high incomes.”

Clubs, whose overseas quota was reduced from five to four players last month, have also been warned they could face sanctions for excessive spending and should back youth development.

“We must take building 100-year clubs as the goal,” the spokesman added. “We will remove the seriously insolvent clubs from the professional league.”

3 Time in jail made a golfer of Notah