Lamela returns to Roma for treatment on hip injury 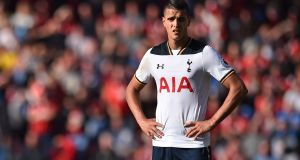 Argentinian Erik Lamela. His manager has said Lamela needs to change the atmosphere in which he works. Photograph: Glyn Kirk/AFP/Getty Images

Érik Lamela has returned to his former club Roma for treatment on a hip injury that has derailed his season.

The Tottenham Hotspur winger, whose last appearance came on October 25th in the EFL Cup defeat at Liverpool, suffered the problem in training and initially it was not considered to be too serious. However, it has failed to respond to treatment, while there was also the hiatus in early December when Lamela had to return to his native Argentina for about a week because of a family issue, his brother having been taken into hospital.

There has long been the sense that Lamela’s rehabilitation from the injury has been problematic, and manager Mauricio Pochettino said on Friday that, with the club’s blessing, the 24-year-old had travelled to Rome to link up with the physiotherapist at his old club – with whom he has maintained a good relationship. Tottenham have sent one of their medics with him.

It is unclear when Lamela will be able to play again, with Pochettino talking in vague terms about how he hoped that “in a few weeks he will maybe be available again to be involved in training sessions with the rest of the group”.

Lamela is the only injured player in Pochettino’s first-team squad, and he has come to feel frustrated and a little isolated at times.

Lamela joined Tottenham from Roma for a club record £30 million in the summer of 2013, and, when he endured a serious back problem in his first season, he returned to Rome for some of his treatment.

“Lamela has gone to Rome; he has strong links there,” Pochettino said. “He believes, and we believe, that it’s important to change a little bit – and in his mind. He asked to finish his recovery time there, and the club, us, the staff believe that that situation is right.” Guardian Service

Allardyce angry with VAR after ‘human error’ denies another goal 08:46
Six Nations and Leinster trips to proceed; Robinson on target in West Brom win 07:25
Bernard Flynn believes Dessie Farrell will regret Dublin’s lockdown training session 07:00
Different Strokes: Glass half full for Shane Lowry after best Masters finish to date 06:00
Rhys McClenaghan: ‘It would be almost silly not to aim for gold every time’ 06:00

2 Owen Doyle: IRFU should be encouraging representation for Irish referees