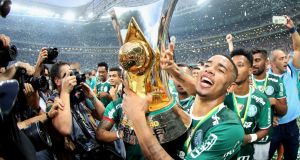 Pep Guardiola felt he needed something extra in attack and his director of football, Txiki Begiristain, gave it to him in the form of a skinny-legged Brazilian teenager from Palmeiras with high hopes and a catchy name. Although as it turned out Keirrison’s name was probably the best thing about Barcelona’s new attacking signing in the summer of 2009.

What a name it is too. Shortly before Keirrison moved to Spain his father explained that as a young man he had become fixated with the leather-trousered Lizard King rock god Jim Morrison of the Doors. In a slightly roundabout tribute, Keirrison’s elder brother was called “Kimarrson”. Two years later his younger brother arrived and was named Keirrison, a more complex mash-up of Light My Fire ace Morrison and grizzled Rolling Stones riff machine Keith Richards.

Sadly, in the years since, Keirrison’s time at Barcelona has become a minor cautionary tale. “I am very happy to be fulfilling my dream of playing at the best club in the world,” he announced on his arrival. Except, he never actually did, unless the best club in the world happens to be Benfica, Fiorentina, Santos, Cruzeiro or Curitiba, where Keirrison spent the next five years on and off the Barça payroll. He is best remembered as a kind of system error, an example of the occasional disjunct between the needs of a manager and the whims and hunches of his director of football.

At which point, emerging from the gloom, breath steaming the air, enter Gabriel Jesus. another skinny-legged Brazilian teenager from Palmeiras with high hopes and a catchy name. Once again Guardiola needs something extra. And once again Begiristain, now director of football at Manchester City, has dished up a lithe, beautifully balanced 19-year-old striker on his first overseas stint who will apparently be the club’s only arrival in the January window.

There is, of course, no real comparison to Keirrison. For a start Jesus is far more advanced in his career, an established talent already playing as a central striker for Brazil and an increasingly compelling presence alongside Neymar and Luan in the run to last summer’s Olympic gold medal. And yet for all the stardust, it isn’t hard to spot some slightly alarming hurdles in his path at what is a genuinely curious moment in City’s modern history.

Firstly well, yes, he is a slight, waif-like teenage Brazilian, a type that has traditionally caused English football to shake its head, take off its jacket and start wearily cracking its knuckles. Like Neymar at the same age, Jesus looks as though he’s made of twigs, sherbet and tissue paper. Either way the initial battle will be simply to establish his willingness to share a pitch with players who will tread on his toes, jounce him in the clinches, rag him to the floor wherever possible and generally see if they can get a rise.

Not that this is likely to be a real problem. Jesus has already been sent off once in his career for fighting back (he was very sad and sorry). But you don’t go from street footballer to teenage international without being able to take a kick or a push. He’s wiry and quick and deadly enough in front of goal to take his own kind of revenge.

Second, there are some obvious pressures on the system that brought Jesus here. Since Begiristain’s arrival, City’s transfer machinery has been undeniably wonky. The past two years have seen £200 million (€233 million) spent on John Stones, Claudio Bravo, Leroy Sané, Raheem Sterling, Fabian Delph and Nicolás Otamendi, all of whom are, to various degrees, still might-yet-bes. Kevin De Bruyne has been a huge hit, as has Fernandinho. But the fact remains eight windows into the Txiki era, City’s best signings are still David Silva, Sergio Agüero and Yaya Touré, all of whom arrived on Brian Marwood’s watch.

There are even some who will argue Begiristain’s reputation has been massively inflated by all those incidental jewels that just happened to turn up along the way at Barcelona. Those who know say it was Sandro Rosell who bagged Ronaldinho and Joan Laporta who produced Samuel Eto’o from his hat. Whereas at City, Begiristain has overseen more than half a billion pounds spent without managing to find a single Pep-class full-back, a ready-made howler-free centre-half or a squad that can match what his manager demands in grit, drive and adaptability.

Firstly Guardiola will believe, will try to make it work, will love Jesus’s hard work and versatility, and has already promised to play him in his new role at centre-forward rather than fudging it in wide areas. And second, Jesus is a proper talent. Watch his movement, the gymnastic, feather-footed little twists and turns, his ability to pass, dribble and finish, and it’s hard not to become a believer.

He is also no stranger to carrying the weight of expectation. Jesus has always been a prodigy. He scored 37 times in 22 games in the under-17 Paulista Championship and was the object of a petition by the club’s fans to propel him into the first team. He started horribly at the Olympics, grew into the team, and has become a key peg in Tite’s new-look Brazil, a tentative, and so far successful shot at a more fluent Seleção, and a bunch of players that operate under pressures that make City’s teething problems look parochial.

Most likely Jesus will spend the next few weeks looking chilly on the bench in a thermal hat. But he remains an intriguing presence, a lovely, floaty little converted winger with a low-slung centre of gravity, and a fascinating test of how Guardiola – the aesthete, the purist – intends to approach the winter slog.