Real Madrid stay singleminded as they close in on the double 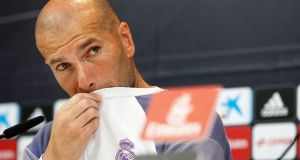 Real Madrid head coach Zinedine Zidane: “Nobody feels like champions, we have to continue until the last minute of the last game. We haven’t won anything and we will not relax.” Photograph: Chema Moya/EPA

Zinedine Zidane insisted his Real Madrid stars don’t feel like champions yet, as his side close in on a potential double.

A victory against Celta Vigo on Wednesday at Balaidos would put Madrid three points clear of Barcelona at the top of the table before the season finale on Sunday. They have also secured a place in the Champions League final against Juventus on June 3rd in Cardiff.

However, Zidane was cautious and said nobody at the club believes they have won anything yet.

Asked about the club’s chances of winning the double, the French coach told reporters on Tuesday: “Nobody is speaking about that in the dressing room. We are only thinking about tomorrow’s game.

“Nobody feels like champions, we have to continue until the last minute of the last game. We haven’t won anything and we will not relax.”

The coach confirmed star player Cristiano Ronaldo would be included in the squad, after the Portuguese striker was rested for their last four away matches in La Liga.

“He will be in the squad for the last two league games,” said Zidane, indicating his rotations would come to an end for the club’s final three games of the season.

Shrugging off questions on the futures of James Rodríguez and Keylor Navas, players linked with departures from Madrid by reports in Spain, Zidane said the team were focused on the clash in Vigo.

Celta, 13th in the table, have nothing to play for other than pride.

“It’s tricky because they’re a good team,” Zidane said. “I expect Celta to play like normal. They have a good side and will do everything to play their game.”