The Italian manager is set to sign a new contract, as Chelsea look to ward off Inter 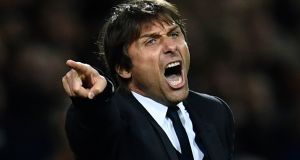 Cesc Fàbregas expects Chelsea to challenge in the Champions League next season and help restore English clubs’ reputation in Europe’s elite competition, with the title winners ready to build on the success they have enjoyed under Antonio Conte this term.

The Premier League champions, who face Watford on Monday at a Stamford Bridge that is sure to be in celebratory mood, are ready to spend lavishly this summer as they prepare to return to the Champions League after a season’s absence. Conte is seeking reinforcements up and down the team’s spine, from Romelu Lukaku to Virgil van Dijk, Tiemoué Bakayoko to Alexis Sánchez, and will also be offered his own new lucrative contract to stay at the club.

Fàbregas, while relatively under-used from the start this season, has proved his worth with his contribution over recent weeks and will remain a key member of the squad. “We definitely feel we can do something in the Champions League,” he said. “It will be a big target for us. Now, lately, you see the English teams are struggling. You will see that six teams can win the [Premier] League easily. Any of them can do it. Then some of them will play Europa League, Champions League. Then on top of that you have the League Cup, the FA Cup. Other leagues don’t have these extra games, extra trophies and extra difficult games.

“You go to places like Burnley and it’s difficult. In Spain, you go to other places, relegation teams, and it’s not as difficult. It will be very tough to compete but we feel we can be strong next season, not just in the Premier League but the Champions League as well. I am sure we will strengthen our team. We’ve won the title but that doesn’t mean that the team cannot get better. Every team, even if they win, will try to improve and I’m sure that Chelsea will try to do that.”

The club’s recruitment drive could result in spending of more than £200m (€235m), while Conte and Eden Hazard are to be rewarded for their eye-catching efforts this term with improved contracts. There will be some departures, too, with Diego Costa’s future uncertain amid interest from the Chinese Super League club Tianjin Quanjian. John Terry will leave under freedom of contract, curtailing a 22-year association with the club, and may be offered his first starts since September this week, while Kurt Zouma and even Friday’s match-winner, Michy Batshuayi, could be made available for loan.

The Belgium forward, who scored his second Chelsea goal six minutes after his introduction from the bench at The Hawthorns, has yet to start a league game since his £33.2m (€39.1m) arrival from Marseille last summer and will be the subject of interest from rival Premier League clubs. West Ham, who had hoped to secure the 23-year-old last summer, may return with an offer and Monaco, Champions League semi-finalists and current leaders of Ligue 1, could also submit a bid. Much could depend upon Chelsea’s success in pursuit of the likes of Lukaku and Sánchez over the next few months.

Chelsea’s immediate priority is a pair of home fixtures, against Watford and Sunderland, before the FA Cup final against Fàbregas’s former club, Arsenal, when they seek to secure the second Double of their history. “It will be emotional,” said Fàbregas, a veteran of eight years at Arsenal and a Cup winner with them in 2005. “It’s not as if I like to play against them because they are a club which is in my heart and they will always be. But this is football and this is what we have to do, it can happen and hopefully we can win the Double. That would be a fantastic season for Chelsea and for us.

“I have to put those feelings aside. You have to be professional. Of course, it means a lot to me, it’s not an ordinary game for me. It will be a tough game. I watch Arsenal, they are playing well, they are playing a different system and maybe they are not performing fantastic in this system. But they are defensively better. They are winning. Their belief is higher. But our belief is high, hopefully we can hurt them in the way we want.” Guardian service