Barcelona keep pressure on but title in Real Madrid’s hands 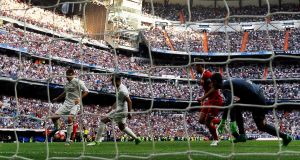 Cristiano Ronaldo set yet another goals landmark as Real Madrid stayed on course for LaLiga title glory with a 4-1 victory over Sevilla at the Bernabeu.

Ronaldo passed 400 competitive goals for Real in what was just his 391st match for the European champions.

After Nacho Fernandez had given Madrid a controversial 10th-minute lead with a quickly-taken free-kick, Ronaldo reached the milestone with a simple tap-in to make it 2-0 in the 23rd minute.

Stevan Jovetic halved the deficit for a Sevilla side who had the consolation of securing Champions League football next season.

But Real’s all-time record goalscorer Ronaldo soon grabbed his second of the night and Toni Kroos then added further gloss.

Real are level with leaders Barcelona on 87 points at the top of LaLiga and still boast a game in hand against out-of-form Celta Vigo on Wednesday night.

Whatever happens in Vigo, the title will be decided in the final round of games next weekend after Barcelona brushed aside Las Palmas 4-1 in the Canary Islands.

Digne was the last defender as he brought down Jese, but he was only shown a yellow card and Barcelona made the most of their good fortune.

Neymar and Luis Suarez struck before the half-hour mark, but Pedro Bigas halved the deficit after 63 minutes.

However, Neymar produced clinical finishes after 67 and 71 minutes to safeguard the points for Barcelona.

Third-placed Atletico Madrid, who were knocked out of the Champions League semi-finals by Real Madrid in midweek, drew 1-1 at Real Betis.

Dani Ceballos fired Betis ahead after 57 minutes, but Stefan Savic rescued a point for Atletico 10 minutes later with a close-range effort.

Sporting Gijon were relegated despite winning 1-0 at Eibar.

Burgui’s 32nd-minute goal gave Sporting only their second away win of the season, but Deportivo La Coruna and Leganes both drew to doom them.

Leganes secured their safety with a 1-1 draw at Athletic Bilbao.

But Alexander Szymanowski equalised on the hour with a header that meant so much for Leganes.

Deportivo also guaranteed themselves another season in the top flight with a goalless draw at Villarreal, whose failure to win handed Sevilla a ticket to the Champions League.

Real Sociedad failed to take advantage of Villarreal and Athletic, rivals for Europa League qualification, dropping points as they were held 2-2 at home by Malaga.

Xabi Prieto gave Sociedad a 31st-minute lead from the penalty spot but Malaga went ahead through Luis Hernandez (45) and Recio (75) before Jon Bautista equalised five minutes from time.

Masters cancel par-3 contest ahead of this year’s tournament 16:24
Delta Work aiming to extend O’Leary’s success in Down Royal festival feature 16:20
Ole Gunnar Solskjær takes pop at pundits over Donny van de Beek comments 16:16
Bernard Le Roux cleared to face Ireland on Saturday after disciplinary hearing 15:55
Johnny Sexton: ‘We just know we have to be a lot better in all areas on Saturday’ 15:43

1 Gerry Thornley: Antoine Dupont and France look perfectly primed for Ireland visit
2 Johnny Sexton: ‘We just know we have to be a lot better in all areas on Saturday’
3 Seán O’Brien: Anger over my parents’ break-up never left me
4 Ireland's centre will hold thanks to Henshaw and Aki’s midfield muscle memory
5 Neil Lennon brands criticism of Shane Duffy’s Celtic performances ‘hysterical’
Real news has value SUBSCRIBE
Crossword Get access to over 6,000 interactive crosswords