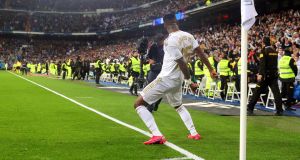 Almost 2,000 days – 1,954 to be precise – since they had last managed it, the Santiago Bernabéu saw their team beat Barcelona. Through the rain they watched as Vinícius Júnior scored the goal that changed everything: a night that had begun nervously, watching their greatest rivals dominate possession, and perhaps the destination of the title race too. For an hour they had suffered, as if awaiting in the inevitable against a side seemingly sure of its superiority, but now they celebrated.

Madrid are back on the top of the table, suddenly infused with life, electricity running through them. Mariano, on as a substitute, made sure of three points.

Quique Setién had said that his team would seek to dominate possession, and he was as good as his word. He had also said that this game was more important for Madrid, two points behind at the top of the table and in what Zidane had described as a “delicate position” and they appeared to be playing with that. It was as if Barcelona had time, content for Madrid to feel the pressure build, the need to win increasingly drawing them into decisions that could cost them.

Isco had won a corner after just 53 seconds but that immediately gave way to a two-minute long period of Barcelona possession which was an early indication of the way things would be. Slowly, Barcelona took control – and slowly was often the word, playing up and playing back again, hold and wait, pass and then pass some more, seeming to invite Madrid in. Mostly, Madrid declined the offer. And so Barcelona played some more.

Usually they were on a rondo to nowhere, but the control was theirs and opportunities would eventually appear. When Madrid sprang, led by Fede Valverde on the right and Vinícius on the left, there was an injection of speed and intent but rarely clarity. The Brazilian in particular kept dashing free only to decide mistakenly.

Barcelona passed and waited, opportunities eventually arriving. Antoine Griezmann shot over, set up by Jordi Alba and Lionel Messi. Arturo Vidal was sent through but he gave the ball up for Griezmann who did the same for Messi, whose snapshot was saved easily. Here was the recurring problem: it can seem the plan is give it to Messi at all costs and sometimes there is a cost. This was one of those times and there were more, Frenkie De Jong among those who deferred when he need not have done.

Then suddenly, a neat ball from Griezmann set a teammate away into space. Oddly, it was Arthur. Just as oddly, it was Toni Kroos who chased him. They are not exactly the fastest men and Arthur got away, Kroos pulling up. Clean through, he tried to clip past Thibaut Courtois, who saved. Next Sergio Busquets’ wonderful clipped ball left Messi alone. He brought it down and, as it bounced back up, sidefooted goalwards. Again, Courtois saved. On it went but in the absence of goals there was an absence of real control and Barcelona, of all teams, were caught by a short corner from which Isco bent a shot towards the top corner.

Marc-André ter Stegen made a fabulous save but this place and this team, which had mostly watched the game go by, appeared awakened. Next, Gerard Piqué had to scramble Isco’s header off the line, just after the hour. A moment later, Karim Benzema volleyed Dani Carvajal’s delivery just over. Barcelona had lost their grip and the ball, the momentum Madrid’s and the noise rising.

Soon, it was off the scale. Barcelona sent on Martin Braithwaite seeking a cutting edge, a way through which he almost provided immediately. But it was Madrid who got it. Kroos slipped the ball through for Vinícius, running into the area on the left. For some reason Piqué stood off, not advancing until it was too late. Perhaps he was waiting for Vinícius to make the mistake for him. Instead, he was the one that did. Vinícius might not have gone for the near post, but that’s where the ball went into the net, off Piqué’s leg.

The roar then was almost as loud as the one that greeted Marcelo and Raphaël Varane cutting off Messi when he looked like he was clean through. Marcelo punched the air and roared. They all did.

Gaël Fickou’s switch to wing a nod to what France expect from Ireland 21:22
Europa League round-up: Celtic let two-goal slip away in France as Lille level up 20:15
Barcelona presidential candidate aiming to bring Pep Guardiola back to Nou Camp 20:12
Connacht’s clash against Benetton postponed after Covid-19 outbreak at Italian club 19:36
Pádraig Harrington hot out of the blocks in Bermuda with opening 67 21:37

1 America at Large: Golfers guilty of legitimising Trump’s toxic regime
2 Gaël Fickou’s switch to wing a nod to what France expect from Ireland
3 Sam Bennett stripped of a second stage win at this year’s Vuelta a España
4 Ireland, France or England? Who needs what to win the 2020 Six Nations
5 Sonia O’Sullivan: Nothing normal about days spent under strict hotel quarantine
Real news has value SUBSCRIBE
Crossword Get access to over 6,000 interactive crosswords