Phelan says silverware would be fitting reward for United 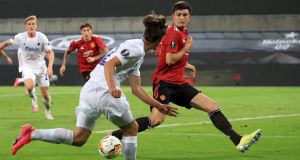 Assistant manager Mike Phelan has stressed the importance of capping a promising campaign by lifting a cup as Manchester United prepare for their Europa League semi-final showdown with Sevilla.

United failed to progress beyond that stage in the Carabao Cup and FA Cup, but they have the opportunity to take that next step against Europa League experts Sevilla in Sunday’s Stadion Koln semi-final.

Phelan has been impressed by the squad’s development, but the Red Devils assistant manager, who has won titles with the club as both player and coach, knows silverware is key.

“It’s very important to show, at the end of the season, all the hard work you’ve put into it and that is usually done with silverware,” he said. “We feel as though we’ve come a long way in a short space of time and I think everything is developing in the direction we want it to and that’s really good from our point of view.

“We felt as though we had a lot of work to do and the time we had to do it in, and we feel as though we’re in front of that a little bit.

“We know where we want to be. We’re not there yet, but I think getting to three semi-finals and finishing third was terrific, but it’s not the be-all-and-end -all. You need to show something, which is a trophy at the end of a season if you possibly can. But I think we’re on the right track.”

Phelan has won trophies aplenty during his previous stints at United, who he returned to as assistant to Solskjaer in December 2018 and helped to reset the culture of in the wake of Jose Mourinho’s departure.

“I think it’s getting there,” Phelan told MUTV about the spirit of the group. “We’ve worked a lot – Ole, the coaches and the staff – in the background and we’ve all started to gel well together.

“Everybody now understands what we expect and how we go about our work and our play, and I think you can tell they communicate well with each other, there are no superstars, and they’re a good group.”

United’s players have had an unexpected opportunity get to know each other better in Germany, where the coronavirus has seen the standard competition format replaced by a mini-tournament in North Rhine-Westphalia.

“We’ve enjoyed the first part of it,” Phelan said of their time in Cologne.

“Now we’re really going into the serious stuff with the semi-final and hopefully we stay here for the long haul.

“Everyone has settled in pretty quickly, one thing that’s been a little bit different to back home has been the heat and the humidity, but I think after the game we had on Monday, the boys will benefit from training in this climate for five or six days.

“It has a little feel of pre-season in a way, when you come in and you’re experimenting a little bit, but we’re at the back end of the season, albeit that seems strange in itself when we talk about it nearly being September.

“But we’re here to do what we hopefully want to do and that’s to qualify for the final and take it one step further than the other semis we’ve got to this season.”

For some players the Europa League would be a first major trophy, including captain Harry Maguire and fellow summer signing Aaron Wan-Bissaka.

The pair have shown promise in their first season as United players and former United defender Wes Brown, speaking after the launch of next month’s Soccer Aid for Unicef match at Old Trafford, believes they have slotted in nicely.

“I think that the two new additions with Harry and Wan-Bissaka have been brilliant,” Brown said. “We needed it. “We were letting in goals last year and it has gone well.

“Harry has settled in well, Aaron has and they’ve got a good combination going now. “You can even say you didn’t expect them to play that well this year because they’re just bedding in, it’s a big club.

1 Suarez’ Italian language exam rigged according to prosecutors
2 What next for green jersey hero Sam Bennett after toughest of Tours?
3 Awarding of 2023 Rugby World Cup to France part of Laporte investigation
4 LeBron James has become this generation’s Muhammad Ali
5 Why this weekend’s Champions Cup semi-finals are still worth watching
Real news has value SUBSCRIBE
Crossword Get access to over 6,000 interactive crosswords