But manager believes City are well prepared for Lyon assignment 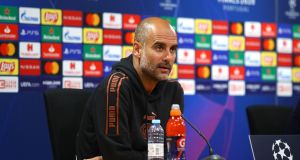 Pep Guardiola: “I feel the time has arrived to be ourselves. We will respect our opponents, of course, but in this game I want to see my team show who they are.” Photograph: AFP/Getty

Pep Guardiola has said the tournament nature of the restructured Champions League is working in favour of less fancied clubs.

The first two sides to reach the semi-final were both clubs who have never won the European Cup before, Manchester City could become a third if they prevail against Lyon tonight, and their manager believes the fact that ties are now decided over 90 minutes is an important difference.

That may well be just another way of saying that City are not favourites to win the competition, as players from David Silva to Ilkay Gündogan to Aymeric Laporte have been stressing all week, but Guardiola insists the change in approach should not be underestimated.

“Every game is a final from now on, but we are ready,” the City manager said. “Playing just a single game makes it quite different, when you play in a first leg you always have one eye on the second, but in this situation there is no second chance. You either go through or go home, and that is possibly why there have been some unexpected results.

“The elite clubs will be there always, they are not going to go away, but perhaps you need this kind of competition sometimes because in one game anything can happen. It’s exciting.”

Guardiola is enjoying the time shared with his players in Portugal and hoping he can stay the full distance.

“The hotel is good, the training facilities too and the weather is lovely,” he said. “I appreciate being able to spend time together because this is an important moment in all our lives and careers. I don’t normally like to be in hotels, I would much rather be at home, but everyone feels this is special. I can speak for all the squad when I say we would like to spend a few more days in this lovely country.”

The French centre-back Laporte, looking forward to a quarter-final against a team from his own country, confirmed the spirit within the City squad was positive and optimistic.

“We are all great teammates and we are all ready to fight,” he said. “We know Lyon are a tough team with a lot of good players and we have to be focused and ready. If we are able to win the Champions League it would be massive for the club, it would make us much stronger for the future, but first we have to win this match.”

City have never been beyond the semi-final of this competition before – though due to the compact format they are already as close now as they came in 2016, two games away from a final –- and after knocking out Real Madrid Guardiola is under no illusions that he is now expected to go all the way.

Spanish journalists in particular have installed City as favourites, despite the fact that Guardiola has not reached a final since leaving Barcelona, but the manager merely smiled when asked if he felt under pressure to succeed.

“Every year the same questions,” he said. “The pressure is always there, we just have to do our best. The quarter-finals we have seen so far have been tight, with little between the teams, and I don’t think ours will be an exception. I think we know Lyon quite well by now, they are fast and aggressive with some dangerous players so it won’t be easy, but you wouldn’t expect anything else in a quarter-final.”

Guardiola is rarely bullish for big games, but struck a confident note when describing the winning mentality of his players.

“These games are played in the head as well as on the pitch and I believe we are ready for it,” he said.

“All I can say at this stage is that we are prepared, and I am incredibly proud of the work the players have put in. I feel the time has arrived to be ourselves. We will respect our opponents, of course, but in this game I want to see my team show who they are. I want us to be strong in our minds and try to carry out our plan.”

City will be without leading scorer Sergio Aguero, who has not featured since undergoing knee surgery in June. The Argentinian has not been ruled out of the remainder of the competition should City progress, but this game comes too soon.

Guardiola said: “He is still in Barcelona. I think he should come here and have to do a test but it is only a few days.” – Guardian