League One and Two clubs vote to bring in salary caps 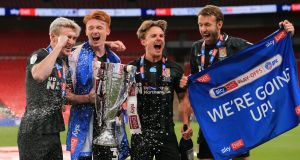 League One and League Two clubs have voted to implement a salary cap, less than 24 hours after the Professional Footballers’ Association warned the English Football League such a measure could be “unlawful and unenforceable”.

It is understood League Two clubs voted 22-2 in favour of a £1.5m cap; the ballot in League One for a £2.5m cap was significantly tighter, with 16 clubs in favour, seven against and one withholding their vote. Wages, bonuses, image rights and agents’ fees are covered by the cap.

The cap is widely regarded by clubs as a step in the right direction but executives realise it is not a perfect solution. The PFA, which has written to the EFL to outline its concerns, has reservations about what would be a “seismic change”.

The passing of the cap is thought to include giving the green light to a 20-man squad cap. Players under the age of 21 will be exempt from the caps, and 22-player squads will be allowed in 2020-21 in what is recognised as a “transition” season.

In the Championship a salary cap of £18m-£20m has been proposed but has yet to be voted on and nothing is expected to be introduced for the 2020-21 season.