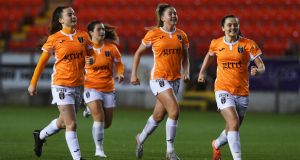 More used in recent years to going out of the Champions League at the quarter-final stage than the qualifiers, Glasgow City were taken to the very brink of elimination of this year’s competition by Peamount United in Scotland on Wednesday night. After a tightly fought game, it took saves by Lee Alexander from Áine O’Gorman and Lauryn O’Callaghan in a penalty shoot-out to put the home side through.

It was heartbreaking stuff for the Irish side who travelled as rank outsiders to a side that has grown used to a bit of success on the European stage and whose early season league form suggested that they were in good shape to make a strong start here. Peamount, though, looked like a side that is used to winning itself and having had a few good spells, the Dubliners dominated the second period of extra time.

The locals created more chances over the course of the night but the visitors had opportunities too to spring a surprise, with O’Gorman almost catching Alexander off guard with a free whipped towards the top left corner when everyone expected a cross. Megan Smyth-Lynch also forced the Scottish international into a good stop with a shot from distance shortly afterwards.

With Niamh Reid-Burke having played well all night, Peamount’s prospects looked decent when it came down to penalties and their goalkeeper made a critical save from Jo Love to keep her side in it after O’Gorman’s effort had been stopped by Alexander.

With the more obvious candidates having all gone and the shoot-out now in sudden death, O’Callaghan had to score to level things up at six apiece but when she tried to stroke the ball into the bottom right hand corner it lacked the power required and having guessed right, Alexander made the decisive save.

It was hard on a Peamount side who had chased their opponents from the first kick of the game to the last but played with considerable composure when in possession themselves at time. They will regret the couple of opportunities they carved out but couldn’t quite convert.

They had started the night really brightly and might well have taken the lead in the opening minutes when O’Gorman’s long, looping cross from the right found Eleanor Rose Doyle in space just beyond the far post. The 22-year-old seemed free to pick her spot put headed almost directly at Alexander in the home side’s goal.

It wasn’t the finish Rose Doyle would have wanted but it provided an early warning to the hosts of the threat that she was going to pose, much of it based on the runs she made off the shoulder of defenders and the ability of the Peamount midfielders, most obviously O’Gorman, to anticipate them.

Having initially looked a little but rattled, City settled into things and generally produced the better passages of passing play. Another of their Scottish internationals, Sam Kerr, looked lively down the right hand side for them and repeatedly threatened to deliver crosses from dangerous positions, but Claire Walsh generally seemed to be on hand to deal with the problem and the hosts struggled to create really clearcut chances.

Their best of the opening half came half an hour in when Rachel McLauchlan floated a free in towards City’s top scorer, Kirsty Howat, but the striker’s glancing header had nothing like enough on it to seriously test Reid-Burke.

Even as the hosts took a bit more control of the game through the second period, the goalkeeper was rarely given all that much to do. Late on, as the urgency increased, the locals finally started to find their mark with Maddie Fulton hitting a low shot in the 82nd minute that looked to be heading for the bottom right corner until the goalkeeper got hand to it. Howat then forced a more spectacular stop in injury time but the locals couldn’t find the finish required to prevent the tie going into extra-time.

In it, they didn’t do an awful lot more than hold their own with Peamount showing no real signs of fading and looking as likely to grab a very late winner as the Scottish champions. In the end, there was just a penalty save between them but that was enough for Scott Booth’s side.