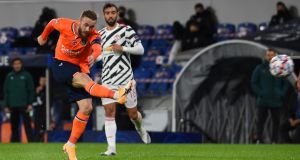 Manchester United were close to a rabble throughout a dire display in Istanbul that poses serious questions about where their season is heading.

Istanbul Basaksehir are Champions League debutants and had not scored or gained a point in Group H before taking on Ole Gunnar Solskjær’s side. Yet by the interval two barely credible errors gave Okan Buruk’s side the goals that consigned United to their first defeat of the phase.

The first was sub-schoolboy defending as Demba Ba was left unmarked to run through and score. The second featured a slumbering Juan Mata being pickpocketed and Edin Visca eventually punishing the Spaniard.

Solskjær’s six changes to the side that lost 1-0 to Arsenal were headlined by Dean Henderson, who was given a first start in a major competition, in goal with Axel Tuanzebe in the XI for the second time this season.

United’s shape of 4-2-3-1 had Donny van de Beek as the creative midfielder alongside Nemanja Matic, the holder. The Dutchman will have admired Harry Maguire’s diagonal pass that dropped over Basaksehir onto Bruno Fernandes’s foot but the Portuguese’s volley was off-target. Istanbul sought to defend deep and so here was a test of United’s ability to overcome a challenge they find difficult.

One move featured Van de Beek passing to Luke Shaw whose cross-goal drive was just missed by Marcus Rashford. What followed was amateurish. Every United player was ahead of the Basaksehir semi-circle when the ball was taken by Berkay Ozcan after a corner and hit to Ba who lurked near halfway and was marked by nobody. This allowed the centre forward a clear run at Henderson and as Matic, United’s nearest man, failed to catch him Ba slid home.

More disarray followed when Tuanzebe, who disappointed throughout, fouled Ba as the 35-year-old tried to go through again. Ba was unhappy the centre back received only yellow and Tuanzebe was relieved the free-kick hit the wall. United lacked spark and execution. Fernandes beat a man then found a cul-de-sac. Matic hit a ball from the left that was easy to clear.

These forays were from static starting positions so it was instructive that potency was evident only when a Basaksehir move broke down and United could counter via a Aaron Wan-Bissaka-Rashford one-two that had the former picking out Martial. His effort was goal-bound before Da Silva’s dive blocked it.

Less positive was the Basaksehir attack that moved swiftly through United and had Boli Bolingoli-Mbombo’s cross being met by Danijel Aleksic’s head, Henderson saving sharply low down. As the break neared United returned to unwanted farcical mode. Mata allowed Irfan Kahveci to pilfer the ball and race down the left. His delivery was cutely dummied by Ba and Visca was there to power a shot beyond Henderson. Solskjær was livid in his seat.

United had to respond, which they did two minutes before half-time. This was simple: Shaw stood a ball up and an unmarked Martial leaped and headed impressively past Mert Gunok. For the second half Tuanzebe was replaced by Scott McTominay, Matic dropping back to partner Maguire. Disjointedness still remained: Matic passed direct to an orange shirt; Rashford, Martial and Shaw wandered up blind alleys.

Composure and fluidity eluded Solskjær’s men. When Da Silva was wrongly penalised for a tackle on Fernandes here was a rare chance to threaten Gunok. Fernandes’s free-kick did test the goalkeeper but it was aimed too close to him and the ball was parried away. McTominay had brought a snap to United. His harrying inspired Van de Beek and now the visitors were winning possession higher up, their tempo of play quickened.

On the hour Edinson Cavani and Paul Pogba replaced Mata and Van de Beek, later Mason Greenwood and Timothy Fosu-Mensah came on for Rashford and Wan-Bissaka so the manager had used all five substitutes.

Calling the cavalry failed, though. Basaksehir were more incisive than United - as illustrated by their failure to again break down an opponent who sat back. Alexandru Epureanu’s late goal-line clearance secured a famous win. Solskjær’s side still have six points in the group but on Saturday they are at Everton where they must improve on their seven points from six Premier League games. – Guardian