Sheffield United player ‘to concentrate on his club career and family’ 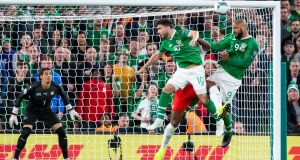 David McGoldrick scored his only goal for the Republic of Ireland in the Euro 2020 qualifier against Switzerland at the Aviva Stadium in September 2019. Photograph: Morgan Treacy/Inpho

Sheffield United striker David McGoldrick has retired from international football just a matter of weeks after Republic of Ireland manager Stephen Kenny had praised him for his ongoing commitment to the cause.

In a surprise statement issued on Wednesday afternoon, the FAI said that the 32 year-old “has decided to retire from international football to concentrate on his club career and family”. The association thanked him for his “fantastic service,” and wished him well for the future.

Kenny was not referenced in any way or quoted in that initial statement, although he is due to name his latest squad on Thursday and it may be that he simply opted to hold off from commenting publicly until then.

The manager had clearly not suspected the player was about to depart when he named his squad for last month’s games against Slovakia, Wales and Finland, however, with Kenny specifically praising the striker for his ongoing enthusiasm, something he admitted, he had been unsure about before speaking with the player for the first time.

“He’s very positive about playing for Ireland,” said Kenny four weeks or so ago. “When I took over Sheffield United looked like they were going to qualify for Europe [which would have meant] extra games. He’s a family man, it’s a good-sized family. He’s 32, nearly 33. You wonder whether a player would say: ‘I’ve to focus on my club’. It happens a lot at that age group.

“There was also his relationship with Mick McCarthy. Mick had him at Ipswich and all of that so when I took over I was wondering in my own head: ‘Is he going to relax and take a bit of a back seat, focus on club football?’ But that wasn’t what I got from him at all; I got quite the opposite. He was absolutely desperate to play. He was just so enthusiastic about playing and really, really hungry to play.”

McGoldrick’s fitness meant that his involvement was limited but he certainly made an impact after coming on against Finland at home and was easily one of the team’s best players in the Euro 2020 playoff against Slovakia, in which he featured for 112 minutes. That now looks like being his last appearance in an Ireland shirt.

Kenny readily acknowledged at the time how big a player McGoldrick had become for Ireland during McCarthy’s second stint in charge. “We’ve been very dependent on David McGoldrick in the previous campaign,” he said. “When he was missing, we lost the game. He seemed to be a massive loss; we needed to increase our options in that way.”

McGoldrick had been in outstanding form for Sheffield United last season, becoming a key focal point for the attacking side of the team’s play despite not actually scoring many goals.

He got just one in 14 appearances for Ireland but generally looked a threat and was valued for his ability to hold up the ball, retain possession and create opportunities and space for those around him.

With Adam Idah, Aaron Connolly and Troy Parrott clearly still getting used to the senior stage, McGoldrick’s experience would have been seen as invaluable at present and, almost certainly, into next year’s campaign to qualify for the World Cup.

At club level he had started four Premier League games for Sheffield this season, which is proving to be more challenging for the club, and come on in a further three.