Paddy Mulligan’s bit-part in the shaping of Manchester United 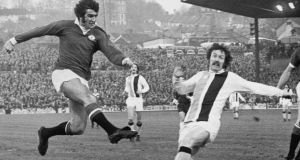 Paddy Mulligan sits and shakes his head, wondering aloud whether it could be really 45 years ago but then the former full-back, now 72, starts rattling off names and numbers and quotes, embarking on such detailed anecdotes that you start to wonder yourself.

It was, though; it was December 16th, 1972 when he played his own small part in shaping the history of Manchester United.

He was coming to terms back then, he says, with the mistake he had made in agreeing to leave Chelsea for Crystal Palace when United came to south London for what would prove to be Frank O’Farrell’s last match in charge.

The writing was already on the wall really for the Cork man who had been the second man, after Wilf McGuinness, to take on the task of being manager while Matt Busby was still retaining so much control of the club.

Most of the 1968 European Cup-winning team were still at the club and four started that Saturday afternoon at Selhurst Park. But Bobby Charlton had the flu, George Best was on the booze somewhere and a couple of others were clearly coming to the end of their time at the club.

“George Best was missing in action,” says Mulligan, who knew the Northern Ireland international a bit, with a sigh.

“But then the whole team went missing that day,” he says. “Their attitude was terrible. I came back out [for the second half] at the same time as Willie Morgan; we were leading 2-0 and Willie was smiling and laughing to me: ‘Ah no, don’t come out for the second half’. ‘It would be nice if you lot did,’ I was thinking to myself.”

The gulf, he says, would have seemed “huge” beforehand, at least as large, he suggests, as the one tomorrow when José Mourinho takes his side to the Hawthorns and a 5-0 defeat for United would cause the same levels of shock.

“He did nothing at United really. I took the game to him. I knew him from his Forest days and reckoned that attack was the best form of defence, so I thought, ‘every opportunity here, I’ll go bombing on and see where it takes us’.”

It took Palace to a 2-0 lead at the break. A Brian Kidd pass 10 minutes in was cut out by Iain Philips and Mulligan was involved twice in the attack that followed, calmly slipping the ball under Alex Stepney on the second occasion to put the home side in front.

Another Dubliner, Tony Dunne, then in his last of 13 seasons at United, injured himself in the defensive scramble around that goal and limped off before eventually being replaced by striker Denis Law, another of the club’s ageing greats who would depart the following summer.

His introduction here, observes author and football reporter Jonathan Wilson in his book The Anatomy of Manchester United, “did little to stem the flow of Palace attacks and, if anything, only served to unbalance United further”.

Law was deployed as a creative midfielder, he writes, but O’Farrell now “had six recognised forwards on the pitch”.

The visitors’ recently signed striker Ted MacDougall had a goal against the run of play disallowed for offside. Mulligan’s second then came three minutes before the break with Robert Bell clearing up field and Don Rogers eventually teeing the full-back up as United tried desperately to retreat and reorganise. Rogers got two himself after the break with Alan Whittle completing the rout in the 89th minute.

“I would have loved to have played against the great Manchester United team that particular day, with George Best, with Bobby Charlton with Denis Law all starting and playing to the best of their abilities. Sadly that wasn’t the case but you can’t take too much away from what we did, we were exceptionally good and even if they had all of those players there are no guarantees. It was a smashing performance by Palace when you consider where we were coming from. But it was a very, very ordinary United team.

“The sad thing is that we didn’t play well enough through the rest of the season and we got relegated. It was a nightmare. We played exceptionally well against the top teams. We played Leeds at Palace and led 2-0, played exceptionally well. We led 2-0 but we ended up drawing 2-2, John Giles got two magnificent goals that day [a rare failure of memory on his part here, Mick Jones got the first], both in the same top corner, brilliant.

“We drew with Chelsea at the Bridge (and beat them at home), we hammered United, beat City at the end of the season 3-2 in Maine Road, as it was back then. We would have put in a half decent game at Liverpool [the eventual champions, who they had drawn with 1-1 at home in August], we were beaten but we didn’t disgrace ourselves.

Their manager, Bert Head was moved upstairs in March so as to make way for Malcolm Allison “but he couldn’t save us, the damage had been done”.

Palace would, in fact, be relegated again the following year, to the old third division. Allison was progressive and proactive but, Mulligan says, missed Joe Mercer, the manager he had worked so successfully alongside at City.

Still, his larger than life personality seemed to win people over and another defender at the club, Jim Cannon, would later marvel that: “No other man could single-handedly take a club from the First Division to the Third Division and still become an instant hero.”

Mulligan was eventually rescued from the grim reality of playing on “a paddy field in Aldershot” by John Giles who signed him for West Brom with whom he would again get to play top flight football before returning home to Shamrock Rovers.

Over at United, the fallout from the defeat he had helped to engineer was swift. “Bert Head said to me immediately afterwards: ‘Your fellow Irishman [O’Farrell] could be in a spot of bother today’. I was asking what he meant and he was saying: ‘Tommy Docherty was in the stand and you’re thinking: ‘uh oh’.”

Sure enough, O’Farrell was sacked the following week: Best too, although he would be back again. The Corkman was, Wilson recalls, made to hand over the keys of his car on the spot and obliged to sign on for the rest of the season while the club haggled over his severance.

Docherty was duly appointed and started to change things at United, to drag the first team out from under Busby’s shadow. He would be long gone, though, before the club’s second great Scottish manager, Alex Ferguson, would finally start to match, then eclipse, the first’s success.

“Frank is a lovely, lovely man, an absolute gentleman,” says Mulligan of the now 90-year-old whose career he effectively helped to end, “but maybe that that was the problem, he was too much of a gentleman for United at that time.”

Manchester City go 15 points clear; Gordon D’Arcy on what we can learn from Italy win 07:36
Gordon D’Arcy: Ireland merely picked through the carcass of Italian rugby 06:00
Munster looking to drive home their advantage on Thomond Park run-in 06:00
Brian O'Connor: Elliott revelations leave racing’s good name in state of disrepute 06:00
For a young one obsessed with football, Gregory’s Girl was heaven 06:00

4 Seán Moran: 2034 report now has the feel of a prophecy revealed by a pandemic