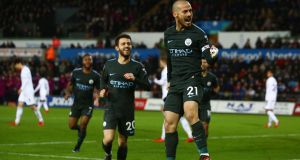 Near-perfect performances of this nature tell little but rather enforce what we already know: this freewheeling Manchester City team are coasting towards the Premier League title. The scary thing is, on their way to comfortably dispatching of Swansea City to rack up a record-breaking 15th straight league victory, at times they were merely going through the motions.

David Silva scored either side of Kevin De Bruyne’s free-kick before Sergio Agüero wrapped up a ninth away win in the league this season. If Pep Guardiola’s side do indeed have so much more to give, it is going to be a joy to witness.

For Swansea, who remain rock-bottom, this was the harshest of reality checks after beating West Bromwich Albion here five days ago.

Paul Clement had warned his players there was no margin for error against free-scoring opponents such as these but they did not heed his advice, repeatedly gifting the ball to a City side so slick in possession. When the visitors had it, Swansea simply could not get it off them. Guardiola made four changes from the side that won Sunday’s derby at Old Trafford but this was same old swashbuckling City, with Bernardo Silva particularly excelling on his return to the team.

He easily wriggled free of Jordan Ayew before teeing up Agüero, who had earlier rattled the side-netting, to nod onto the roof of Lukasz Fabianski’s goal before another superb left-foot delivery supplied David Silva, captain in the absence of Vincent Kompany, for City’s inevitable opener.

The question for the Swansea defence, though, has to be why did they allow City’s captain so much time and space inside the six-yard box to prod home.

Guardiola and Mikel Arteta, wearing a woolly hat, embraced in the City technical area but these celebrations were low-key. Seven minutes later, after Mike van der Hoorn fouled Raheem Sterling, there was more cause for jubilation. City doubled their lead when De Bruyne fired the free-kick low beyond Fabianski, who was deceived by the ball’s bounce en route to goal.

Clement fumed but one positive was Wilfried Bony, who enjoyed a physical battle with Eliaquim Mangala, a one-time City team-mate, and had a thankless task leading the Swansea line. Roque Mesa, too, showed glimpses of class but they were merely glimpses, and the gulf in quality between the sides was evident. Swansea looked and played like a team bottom of the table, bereft of confidence, despite that win against West Bromwich last weekend, typified by Martin Olsson and Tom Carroll running the ball straight out of play. The latter was unsurprisingly taken off at half-time, and replaced by Tammy Abraham.

Clement’s face was a picture of frustration on a damp and miserable evening in south Wales.

Abraham barely had time to take off his tracksuit bottoms when David Silva fired narrowly past Fabianski’s post in pursuit of a third just after the interval. Swansea puffed out their chests for a moment but it was soon again one-way traffic. Bernardo Silva ran rings around Olsson all night, and played in Agüero, who forced Fabianski into a smart right-handed stop.

For City, a third goal was only a matter of time, and when Sterling sped into the box, jinking inside Kyle Naughton, there was David Silva to take on the baton, holding off Roque Mesa – who was too frightened to fell his countryman – before dinking the ball home for his fourth goal of the season.

This was cruise control for City, with Guardiola happy to withdraw Fernandinho on the hour mark. Kyle Walker was rested altogether, with the towering Danilo ably filling the void at right-back. An episode of City keep-ball shortly afterwards was equally galling for Swansea, who then got off lightly when Agüero dragged his effort agonisingly wide after comfortably bypassing Alfie Mawson. In fairness, Swansea would have scored but for some Ederson heroics, with the wrongfooted City goalkeeper getting two hands to Roque Mesa’s rasping deflected effort from the edge of the area.

As for Clement, he turned to Leroy Fer, who injected a little impetus. Ki-Sung Yeung had a late effort hacked away by Nicolás Otamendi but by then it was already game over for Swansea, with Agüero adding a fourth, and his 13th goal of the season. Manchester City had totally outclassed their opponents – again. Cue the celebrations. – Guardian service