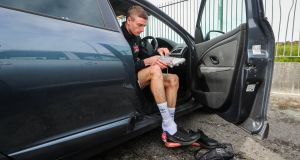 Dundalk’s Daniel Kelly puts on his boots in his car ahead of a return to training at Oriel Park on Wednesday. Photograph: Ryan Byrne/Inpho

Clubs are expected to have the FAI’s latest proposals to get the Airtricty League restarted put before them on Thursday morning with preliminary talks behind the scenes this week suggesting that the association will put an improved financial package on the table.

There is considerable uncertainty among clubs about how much might be made available to support them but a somewhat greater sense of optimism seems to exist that a deal might be possible given the general easing of restrictions in wider society and the growing sense that games might not, after all, have to be played behind entirely closed doors or at neutral venues.

It is almost a month since the association outlined a proposal worth around €2.5 million which included the cost of staging games in a limited number of venues, of equipping the grounds so as to stream the matches and providing around €1.1 million to the clubs to compensate for some of the revenue lost through the absence of paying spectators.

At the time, FAI interim deputy chief executive Niall Quinn suggested in a radio interview that the association had identified where a little over half of the money would be sourced but that more time was required to get the rest in place. This, and the fact that the additional revenues that the streaming was supposed to generate were entirely uncertain, caused concern among those clubs more sceptical about the wisdom of returning.

The hope now is that the association will have come up with more substantial funding, quite possibly with the help of extended Government wage and other supports, and that the evolving nature of the wider coronavirus landscape has raised the prospect of clubs using their own grounds and admitting even a limited number of fans.

Clubs, though, say that they want certainty, with little appetite for taking a plunge now in the hope that things will go well enough for additional money to come in later.

On the face of it, providing any great measure of that is tricky for the association, which cannot be certain yet what is going to come out of Uefa’s next big briefing in a week’s time.

The prospects of the senior national team’s games going ahead in the autumn do seem brighter now than they did even a few weeks ago and the chances of some spectators being allowed in have improved too, all of which would suggest an improved financial outlook at Abbotstown. But times are undoubtedly still tough for the organisation which was struggling with a mountain of legacy debt to start with.

It is not clear yet whether Fifa is going to deliver on the suggestion a couple of months ago that it was going to provide significant support to hard-hit associations around the globe. It is believed that the FAI had been hoping for around €7 million from any support fund established.

On a practical level, the campaign to get things up and running have also been helped by the Covid-19 testing regime established and funded, at considerable cost, by the association. After three weeks of testing on players, officials and staff at Shamrock Rovers, Dundalk, Bohemians and Derry City at this stage, there has not been one positive result for the virus.

“That’s been a big help in terms of generating confidence,” says Stephen McGuinness of players’ union, the PFAI. “I think Shelbourne will go back to training on Monday, without testing, and I don’t think that would have happened without the players there seeing the evidence the pilot programme has provided that the situation is safer than we might have imagined even a few weeks ago.”

The easing of the medical protocols to the extent that they have that option has hugely significant cost implications across the league.

McGuinness accepts, however, that while Shelbourne can return on the basis that they, like the clubs who have qualified for Europe, have continued to pay players, the clubs who have not will be weighing up the financial offer before they get onto the practicalities of a resumption at board and other internal meetings scheduled for the coming days.

Any threat of relegation might serve as an added deterrent with Sligo Rovers, for instance, currently three points adrift at the foot of the table with four games played but a resumption of the first division would be far less plausible, despite the lower costs involved, if there was to be no promotion at the end of the season.

For Rovers, an added concern would be the limited amount of time available to get themselves out of trouble, with the plan being floated in recent weeks involving the top-flight season being shortened to 18 games – leaving them with 14 to play – and last from mid August to early December.

On Monday, however, Shamrock Rovers manager Stephen Bradley insisted that the campaign should continue through the Christmas period and into the new year if required. “We have that time available to us,” he said, “and we should use it if we need to.”

McGuinness suggests that others clubs too are talking behind the scenes about going beyond the 18 games. “All the sounds are that there will be some sort of crowds in the grounds by the end of August and there is a lot of talk about why, if that’s the case, that there would only be another 13 games [for those clubs who have already played five].”

It is a more positive outlook than seemed likely a few weeks ago but with several clubs still having next to no room for financial manoeuvre as they weigh up what would be the least disastrous scenario in the current circumstances, it remains far from clear whether everyone will really want to play ball with the FAI.