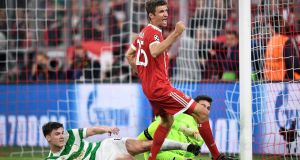 Celtic are becoming ominously accustomed to Champions League mismatches. The margin of defeat in the Allianz Arena may not have been as harrowing as those delivered by Barcelona and Paris Saint-Germain in the last 13 months but the tale of a gulf in class was familiar. Bayern – this recently rejuvenated Bayern – further demonstrated the gulf in chasm between Europe’s elite and the rest; and did so with consummate ease.

Nonetheless, it would be remiss to ignore the failure of Celtic to do themselves justice. Whereas Brendan Rodgers had spoken before the game in wholly positive terms, his sentiment was undermined by failings everywhere.

Celtic must play better when Bayern visit Glasgow, even if a legitimate Rodgers target from Group B is the claiming of a Europa League place. On this occasion in Munich, Celtic played as if intimidated by reputation.

The return of Jupp Heynckes to Bayern had increased the scale of Celtic’s task even before personnel problems became apparent.

Jozo Simunovic, a defender whose career in Glasgow has been blighted by injury, missed the trip to Bavaria because of a hamstring problem.

Rodgers had not prioritised that area of his team during the summer transfer window, meaning the deployment of a makeshift back line against one of European football’s most potent attacks.

The problems associated with that were apparent within seven minutes. The hosts had already had a goal dubiously ruled out – the ball having been adjudged to have crossed the byline before a Robert Lewandowski cutback – by the time they were denied a blatant penalty. Mikael Lustig, playing in an unfamiliar centre-back position, clearly pulled the shirt of Lewandowski. By the time David Alaba blasted high over Craig Gordon’s goal from a glorious position, only 14 minutes had been played and this already had the look of a long evening for the visitors.

The opening goal was not long in arriving. Dreadful defending was again pertinent, Lewandowski being left in splendid isolation to meet a Joshua Kimmich cross. Gordon saved expertly from the Poland striker but Thomas Müller was on hand to dispatch the rebound.

For all Bayern’s talent, the dishevelled nature of Celtic’s first-half performance must be acknowledged. Strangely, for a side so dominant domestically, the Scottish champions played without confidence. Rodgers’s team were also without shape. They couldn’t retain possession to any meaningful degree at all. There was plenty of generosity too.

Number two arrived from Kimmich, who was completely unmarked to head a Kingsley Coman cross past the stranded Gordon.

The Bayern support did not appear particularly bothered by their team’s canter, which left it open to debate as to how ruthless they may choose to be. What wasn’t up for discussion was the key part Celtic were playing in their own embarrassment.

Mats Hummels was afforded a rare goal celebration in extending Bayern’s advantage to three. Arjen Robben, playing in his 100th Champions League match, took a corner after Celtic landed themselves in a terrible mess and Hummels delivered a glancing header. Robben himself was then denied a goal to mark his landmark appearance by a goalline clearance from Gamboa.

In attempting to even partly stem wave after wave of Bayern attacks, Rodgers introduced Moussa Dembélé and Tom Rogic for Leigh Griffiths and Stuart Armstrong, who had been anonymous.

The switch did rouse Celtic as Rogic, Scott Sinclair and James Forrest forced the goalkeeper Sven Ulreich into fine saves but there was to be no consolation.