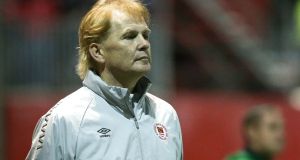 St Patrick’s Athletic manager Liam Buckley says he is unconcerned about what team Cork City put out on Friday night, but there is likely to be some relief around the rest of the club that John Caulfield’s men no longer have a league title to win. At the very least, the City regulars might just have staying fit for the FAI Cup final in the back of their minds as they take to the pitch in Inchicore for one of three games with significant bearings on the relegation battle.

Finn Harps would be gone by the end of the night if they were not to beat Drogheda United, and Ollie Horgan will be without Ethan Boyle for the game. The Harps manager also has serious doubts again about Paddy McCourt, Sean Houston and Packie Mailey as he looks to hit upon a winning formula for the first time since the 2-0 at Limerick on September 1st.

Galway United could do with winning at the Markets Field tonight but their form does at least suggest that they are in with a shout despite having gone out of the cup to Neil McDonald’s Limerick. United have been hard to beat lately thanks to a run of goals that has yielded a series of draws and a big win or two; most obviously against relegation rivals Sligo Rovers a few weeks back. Another three points this evening would, Shane Keegan acknowledges, go a long way towards keeping the club in the top flight next season.

“We need to be aiming for a win,” says the United boss, who is without the injured Ronan Manning and has a slight doubt about Gary Shanahan. “You would imagine it would put us in a good position heading into the final day, if we were to win.

“Ourselves, St Pat’s and Sligo Rovers all have games against difficult teams at the weekend. All we can do is focus on our own performance against Limerick.”

Buckley says much the same, with the St Patrick’s manager insisting his players just need to perform themselves, without worrying too much about which Cork City shows up.

“Look, the table doesn’t lie, the best team wins the league; they are champions and deserve to be, but what’s important is that we play the way we can,” he says.

“I think everybody around the club is acutely aware of how important this game is, but our home form has been good: we beat Shamrock Rovers here and were terribly unlucky not to beat Limerick. If we play the way we have been in some of those games and the crowd gets behind us again, then we have every chance of getting what would be a really important win for us.” Darren Dennehy remains out injured while Graham Kelly is suspended for the game.