World Cup playoff draw: Seeded teams won’t be daunted by trip to Dublin but they would be wary 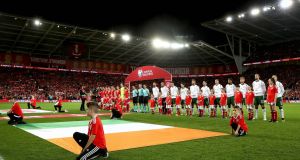 The teams line up for the anthem ahead of the Wales v Republic of Ireland qualifier at Cardiff City Stadium. Photograph: Ryan Byrne/Inpho

The Republic of Ireland’s record in playoffs is a testament to the importance both of being seeded and then enjoying some good fortune when the balls are being drawn.

Bosnia and Herzegovina, Martin O’Neill would doubtless argue, never looked like pushovers two years ago but two of the team’s only three successes at this stage of the competition have come against Iran and Estonia, who would have been regarded as the weakest sides possible on those occasions. The problem this time around is that we might be regarded as being in contention for that particular title.

What O’Neill and his players bring into next month’s games is momentum and a belief, after adding Wales to the list of good sides they have narrowly beaten over the last couple of years, that anything is possible on a given day. Still, there will be little desire to test that theory to its limit.

Picking the most desirable opponent from Switzerland, Italy, Croatia and Denmark may not be a straightforward task and O’Neill would surely not tempt fate by publicly expressing a preference, but the available evidence would suggest that both he and his Northern Ireland counterpart Michael O’Neill, will be privately hoping that Copenhagen is the venue for next month’s away leg.

Even then, of course, the more significant stroke of luck from the Republic’s point of view might still be regarded as the combination of results in Group F that ensured the wins in Dublin and Cardiff were enough to get James McClean and Co this far.

It is hard to imagine that any of the team’s prospective opponents will be daunted by a trip to Dublin but they are bound to be wary. The win in Wales is the most immediate reason but O’Neill’s by now well established knack for getting the best out of his team on the biggest of occasions will ensure that the team commands the respect of any rival.

Northern Ireland may look just a little more attractive to the seeded sides as they sit down for the draw at lunchtime today. The record this year of Michael O’Neill’s side is almost a mirror image of the Republic’s and the campaign concluded disappointingly this month with defeats to Germany and Norway, results that cost the North the chance to be among the seeds themselves. Still, they have done enough over their last two campaigns – and even this year when Norway and the Czech Republic were both beaten at home – to ensure nobody is complacent about visiting Belfast.

If the Danes, meanwhile, somehow seem like the team that the O’Neills might hope for then the rankings – both those of the second-placed sides in the group stages and the Fifa ones that determine the seedings – suggest the Swiss and Italians are the ones to avoid.

It is the Swiss rather than the four times World champions who lead the seeded sides in both lists with Vladimir Petkovic’s side having been on course for a perfect campaign until they came a cropper a couple of weeks ago in Lisbon.

Ireland’s history against them is less encouraging, as it happens, than the very recent record against Italy but a full strength side determined to secure qualification for a World Cup after what has been a slightly sobering campaign, might quickly put the 1-0 win at the European Championships in Lille in some sort of perspective.

It is not a great Italian team and there are questions about the approach of the current coach Gian Piero Ventura, but there is plenty of quality in his group and so an Irish victory over two legs would require something particularly special from Martin O’Neill and his men.

Much the same might be said of Croatia whose array of individual talents remains quite striking more than five years after the likes of Ivan Rakitic, Luka Modric and Mario Mandzukic all featured prominently in the 3-1 defeat of Ireland in Poland that marked the start of a very difficult championship for what was then Giovanni Trapattoni’s side.

It is worth noting, however, that the Croats would have fancied themselves to top Group I and their failure to do so cost Ante Cacic his job in the immediate aftermath of the home draw with Finland.

His successor, Zlatko Dalic, made a positive start, with the team winning quite well in Ukraine but he has never coached at anything like this level, something that may prove a problem given the somewhat stellar nature of the group he inherits, and he does not have any time really to try put his own mark on things between now and the two playoff games.

As for the Danes, Christian Eriksen is just the sort of player who might, one suspects, cause Ireland problems as he pushes forward from midfield but after the last 20 minutes in Cardiff, O’Neill may not be overly fearful of a side whose Plan A is to launch high balls at two big men up front.

In September, though, that approach seemed to work rather well for Age Hareide’s side as they beat Poland 4-0. The notion of Ireland achieving a result of that magnitude seems like a pipedream and yet we have seen enough to believe reaching Russia no longer is.

A little luck today, though, might go a long way.

1 Timo Werner giving up on Liverpool dream on path to being truly wanted
2 Ian O’Riordan: An education in race and running during college days in America
3 Mature Ringrose keeping the ups and downs of rugby life in perspective
4 Sideline Cut: Marcus Rashford proves himself a leading man off the pitch also
5 Tianna Bartoletta: ‘After you’ve gotten your medal, you become black in America again’
Real news has value SUBSCRIBE
Crossword Get access to over 6,000 interactive crosswords