No place for Dunne in Ireland squad 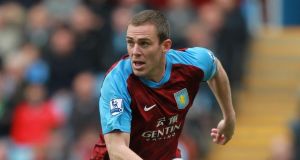 Richard Dunne has been left out of the Ireland squad for friendly in Cardiff.

Republic of Ireland manager Giovanni Trapattoni has left Richard Dunne out of his squad to face Wales in Cardiff next month with the Italian suggesting the defender needs more time to prove his fitness after an injury-plagued season.

Dunne, who completed a move to Queens Park Rangers earlier this week after missing the entirety of last season with Aston Villa through injury, had featured for Ireland during Ireland’s end-of-season friendlies.

But Trapattoni has erred on the side of caution on this occasion ahead of September’s crucial World Cup qualifiers against Sweden and Austria.

There is also no place for Keith Andrews, who had been sideline since January with an Achilles problem but made his comeback with Bolton earlier this week. Kevin Doyle, who is carrying a groin strain, is again omitted while skipper Robbie Keane has been rested for the match by Trapattoni.

Nowich midfielder Anthony Pilkington, 25, could earn his first cap having received his first call-up for a friendly against Poland in February.

Ireland were unbeaten in 2013 until last month’s 2-0 World Cup qualifying defeat to Spain, claiming impressive victories over Georgia and the Faroe Islands and holding England to a 1-1 draw in a Wembley friendly.

Trapattoni said: “We can draw a lot from our performances in May and June. The team showed strong character and enthusiasm against Spain, England and Georgia, and picked up three vital points against the Faroe Islands.

“The players have demonstrated that they are building on each game, and are working very well together.

“This fixture will allow us one more opportunity to prepare for the important World Cup qualifiers in September against Sweden and Austria. We will use this time to experiment and develop confidence ahead of the games.”

The Football Association of Ireland confirmed the squad will be shortened ahead of the fixture to accommodate injuries.