Nicklas Bendtner warns Ireland that Danes will go to the wire

‘They will come more out, which allows us to get more space. It will be more interesting’ 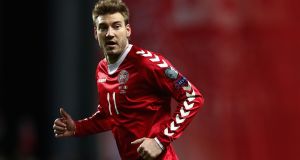 Nicklas Bendtner of Denmark in action against Republic of Ireland at Telia Parken in Copenhagen. Photograph: Catherine Ivill/Getty Images

Nicklas Bendtner has warned the Republic of Ireland that Denmark will be ready to go all the way to the wire to keep their World Cup dreams alive.

The Danes will arrive in Dublin on Tuesday evening having been booed off by sections of the home crowd at the Parken Stadium on Saturday night after Ireland frustrated them for 90 minutes to snatch a 0-0 draw in the first leg of their winner-takes-all play-off.

One way or another, there has to be a winner at the Aviva Stadium and Bendtner insists he and his team-mates will fight to the death to secure their ticket to Russia.

The 29-year-old Rosenborg striker said: “We’re going down there to try to win the match. I can’t say what’s going to happen, but we’re prepared to play 120 minutes if that’s what it takes.

“They will come more out, which allows us to get more space. It will be a more interesting match.”

Denmark dominated much of Saturday’s game and created a series of chances, only to be denied by the excellence of Ireland keeper Darren Randolph.

If some of the locals among a crowd of 36,189 were less than impressed on the final whistle, Bendtner was not too downhearted with a score draw in Dublin enough to see his team through.

He said: “The goal for us was to win the match, 100 per cent. We also had the best chances and with a little bit more luck, we could have scored one.

“But we maybe have a slight advantage in that if both teams score a goal, we will be the ones who go through.”

Ireland’s approach in Copenhagen was pragmatic to say the least with lone striker Daryl Murphy handed the thankless task of trying to battle the home defence with little support before Shane Long took up the baton.

Bendtner, who played under manager Martin O’Neill at Sunderland, is expecting more of the same at the Aviva, but is hoping for a different result.

He said: “Ireland didn’t really surprise us. Maybe we thought they would come more out of the blocks and try to attack more in numbers instead of just kicking the ball away and hoping to hit a player.

“They defended with their lives, like we’ve seen. We had three good chances and maybe we could have done better on some of them, but they defended really well.

“They are strong all together, so we have to match that again on the away pitch. We have to take our chance and hopefully score a goal.”

1 Man City to investigate Kyle Walker over lockdown sex party
2 Potential Robbie Keane exit could prove costly for FAI
3 Mystery of former Ryder Cup star Anthony Kim rumbles on
4 Simon Zebo: ‘It’s been tough not being able to put my hand up to play with Ireland’
5 Bagger's three-ball plays with history
Real news has value SUBSCRIBE
Crossword Get access to over 6,000 interactive crosswords