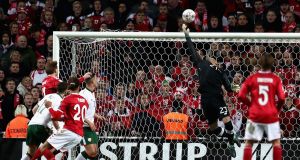 The official man of the match and it was deserved. Made an early double-save from Larsen and then Cornelius. Parried Eriksen’s shot straight to Sisto, who couldn’t capitalise, but then made a vital save from a Poulsen header at the death. Rating: 8

Was occasionally suspect to the diagonal balls Denmark persisted with, including Kjaer’s early ball to Larsen. Good going forward and provided Ireland’s brightest moment, skinning Larsen and forcing a save from Schmeichel on the angle. Rating: 7

The perfect man to deal with Denmark’s relentless aerial bombardment. Got his head on near enough everything as Ireland just about kept the Danes at arm’s length. Rating: 6

Like Duffy, dealt with the majority of what was launched his way. Made one clanger - a poor touch falling straight into the lap of Eriksen - but was reprieved as Sisto missed the game’s best chance. Rating: 5

Fairly anonymous throughout, he was shielded by the tireless running of McClean and never really got on the outside. Like Christie, was susceptible to the angled ball with the Danish fullbacks pressing. Rating: 5

Personified all that was good about Ireland’s efforts off the ball and their lack of ability on it. Put in a huge shift defensively but ultimately poor in possession. Rating: 6

Another player who struggled to get a real foothold in the game. Fluffed his lines as he went to follow-up Schmeichel’s save from Christie. Lasted 93 minutes but there have to be question marks over whether or not he was fully fit. Rating: 5

Stuck to his task admirably but was ultimately on the periphery for the majority of the game. Was always going to be difficult to assert any real influence with Ireland so poor in possession. Rating: 5

The game seemed to pass him by, and there were only a handful of occasions when he got on the ball and tried to dictate the tempo. Set-piece delivery was mixed at best. Rating: 5

Another night of relentless work and patrolling the left flank on his own. Never had a sniff of another fairytale winner as Ireland spent much of the game camped on the edge of their final third. Rating: 7

Handed a pretty thankless task and had next to nothing to feed off. Unable to hold the ball up because it never came anywhere near him. Doesn’t have the legs to press like Long, meaning Denmark’s centre-backs had the freedom to pick their passes. Rating: 5

Shane Long came on for a sprightly cameo but the introduction of Whelan and Hourihane served only to run down the clock. Rating: 5

Ireland kept their shape well throughout and were disciplined and O’Neill deserves credit for that - but their inability to carve out a single chance in the second half was very disappointing. Rating: 5