TV View: Time to go for the ‘three points’ back at the Aviva 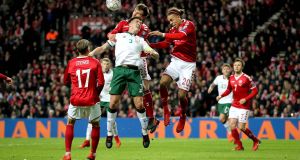 Denmark’s Yussuf Poulsen and Andreas Bjelland battle with with Ciaran Clark of Ireland during the World Cup playoff first leg at the Parken stadium in Copenhagen. Photograph: Ryan Byrne/Inpho

The curmudgeons might suggest that the spectacle in Copenhagen was not the Beautiful Game’s finest 93-ish minutes, and indeed there are those who would argue that any prisoners who watched the game have been punished enough and should immediately have their sentences commuted. Or at least be let out on parole.

Jim Beglin, though, summed it up handily enough. “An ugly match . . . but quite a pretty result in the end.”

Lest we felt uplifted by that assessment, though, Eamon Dunphy reached for a pin and inserted it in our Olé-Olé-ing balloon, reminding us that it wasn’t, in fact, a great or even a good result “because if we draw at home we’re gone”.

Confused emotions, then, at the end of it all, not helped by George Hamilton telling us that we’d left Denmark “with a point” and a gutted Callum O’Dowda informing Tony O’Donoghue that “we wanted to come here and get three points”. Nul points, of course, were up for grabs, but when emotions are high, confusion can reign. Like on Sky Sports on Thursday night when Gerry Armstrong accused an allegedly diving Swiss player of possessing a Latin temperament.

O’Dowda, incidentally, was asked last week what was his earliest memory of the World Cup. If you’re standing, please, for your own personal safety, take a seat . . . the 2010 finals in South Africa.

And here he was in the starting line-up in Copenhagen when the bulk of us would reckon that anyone whose earliest World Cup memory is 2010 should be in a crèche.

Eamon’s response to the line-up? Guess? “I suppose Wes Hoolahan being out isn’t a surprise.” He was, at least, buoyed by the exclusion of Glenn Whelan, but the absence of Wes (and Shane Long) left him feeling deflated and having a foreboding kind of a feeling about the night ahead.

Liam’s feelings were more neutral, comforted by the fact that O’Dowda is “a footballer”, which was no harm, while conceding that “I don’t know much about Denmark”. It’s been a while since the draw, so an auld click on Wikipedia might have been an idea.

Over to the stadium. Officially there were 2,450 Irish fans among the 38,000 crowd, but then Amhrán na bhFiann struck up and you could only giggle. The Danes were lucky to get a scarf in to the place, never mind a fan.

“Fasten your seatbelts, settle in for a bumpy ride,’ George advised, and soon after Darren Randolph smoothed the bumps with a double save before not being tested by Pione Sisto when he should have been.

Jim: “Sounds like a cowboy.’ George: “Let’s hope we’re not reporting on the successes of The Sisto Kid.” Jim and George: \[Loud chortling\]

A Garryowen from James McClean and a Séamus-esque run from Cyrus Christie. Apart from that, little to report.

Half-time. Damien summed up the tactics. Ireland: Long, straight and hopeful. Denmark: Long, diagonal and hopeful. Plenty of variety, then. Big Jack loved an auld diagonal, so he would have been happy. But while the football wasn’t floating Liam’s boat a great deal, he was perfectly content-ish with 0-0. Eamon? Guess? Go on.

“We need Wes Hoolahan on the pitch.”

Generally, though, he was happier than usual with the performance, only describing it as “terrible” and “rubbish”. And picking out a representative example of an Irish one-two from the first half, he said “there’s Murphy heading it on to nobody”.

A little bit like ourselves, he was surprised to be told by Darragh that we’d had 33 per cent of the possession, when it felt little more than three, but he finished up on an optimistic note: “They’re hopeless.” And if they beat us and we had to watch them in the World Cup, “we’ll cry for six months”. And “we won’t be hugging ourselves”.

On that positive note, it was time for battle to recommence.

George put the frighteners on us by suggesting that Denmark had faded, when you’d think he’d have DANGER HERE learnt by now. “Ireland are playing well without the ball,” he added, the story of our this team’s footballing lives, before declaring “good little spell by Ireland, that” after we’d won a throw.

Jim was no less chirpy. “He spends that much time in the air, he must be close to qualifying for a pilot’s license,” he said of Shane Duffy, before we had our Thierry Henry moment of the night – Shane Long’s shot deflected off the bottom of a Dane but the referee didn’t spot it and failed to award us a corner. George was incensed. Jim too. 33rd team?

Then Randolph saved us at the death and George concluded that “it could be a long night on Tuesday”.

It will, more than likely, be the longest night of our entire lives. Let’s just pray that we take the three points.

1 My favourite sporting moment: Roscommon minors restore pride to a county
2 Germany well ahead of the curve as Bundesliga gears up for return to action
3 No Masters, so Tiger Woods battles son Charlie for green jacket
4 America at Large: Hurling fan Dowling leading the fight against Covid-19
5 Stephen Kenny: ‘I want people to come and look forward to watching this team’
Real news has value SUBSCRIBE
Crossword Get access to over 6,000 interactive crosswords