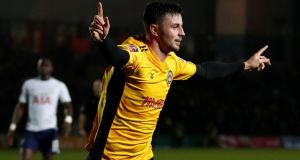 Tottenham avoided a seismic upset in the FA Cup as Harry Kane rescued a 1-1 draw for the Premier League side at League Two club Newport in the fourth round.

Spurs sit 71 places higher than Newport in the league pyramid but they fell behind at Rodney Parade when Irish striker Padraig Amond rose highest to head home Robbie Willmott’s cross in the 38th minute.

An ignominious exit loomed for a reasonably strong Tottenham outfit — with Dele Alli and Son Heung-min introduced from the bench — but Kane tapped in at the back post from an 82nd-minute corner to spare the visitors’ blushes and send the tie to a replay.

Newport had not featured in the fourth round of the FA Cup for 39 years, but Amond had Rodney Parade rocking when he headed home Willmott’s cross. For much of a full-blooded contest it looked as if that would be enough to condemn Spurs to a shock defeat against opponents 71 places below them on the league ladder.

But with the visitors seemingly fast running out of ideas, substitute Son Heung-min flicked on a corner and Kane ended a frustrating night in front of goal with the simplest of far-post tap-ins.

It was cruel on gallant Newport who had given so much to the contest, but at least they have the consolation of another substantial pay day with a Wembley replay to come.

The two sides’ previous FA Cup meeting was in January 1960 when Danny Blanchflower was among the Spurs scorers in a 4-0 third-round win at Somerton Park.

Tottenham manager Mauricio Pochettino kept some first-team players in reserve — among them Dele Alli and Son — but the presence of Kane, Eric Dier and Jan Vertonghen showed this was a game Spurs were taking seriously.

But the Premier League side were forced onto the back foot from the off as Newport started at a furious pace. Joss Labadie hustled Vertonghen into a third-minute mistake to set up Frank Nouble but the striker skied horribly from 12 yards. Labadie then robbed Victor Wanyama to deliver a 20-yard shot which Michel Vorm held in the Spurs goal.

Tottenham were struggling to find any fluency on a muddy pitch, although Kane did side-foot over from 25 yards after linking well with Fernando Llorente.

Newport continued to press and Vorm held Willmott’s free-kick before Ben White dragged his volley wide. Spurs finally stirred from their slumber just after the half-hour mark as Moussa Sissoko raced onto Llorente’s pass. Sissoko picked out Kane, arriving into the penalty area at pace, but his shot was pushed onto the post by Joe Day.

It was a rare moment of concern for Newport but Rodney Parade erupted six minutes later. Spurs failed to clear Ben Tozer’s long throw and the ball fell to Willmott, who swung over a cross which Amond planted past Vorm with a firm header.

Amond was denied a second when Vorm pushed his volley wide and Pochettino responded to the situation at half-time by ripping up his wing-backs formation and replacing Kyle Walker-Peters with Son. The switch allowed Vertonghen to rampage from his new left-back position and he linked up well with Son before the South Korean was crowded out by home defenders.

Spurs were now dominating possession but clear-cut chances were hard to come by with the Newport defence standing firm and Kane’s assured touch for once letting him down. Alli was sent on in the 65th minute and he instantly set up an opportunity for Son, whose effort was blocked by the legs of the diving Day.

The pressure was mounting on the Newport goal and Kane went close twice before he found himself in the right place to turn Tottenham’s fortunes.

1 Six Nations: Ireland are contenders but England still the team to beat
2 Mike Catt hopes to have Irish backs purring in Six Nations
3 Owen Doyle: Creeping professionalism of schools rugby a threat to the game
4 The world spins but it’s soon back to Dublin and Kerry
5 Rowing: Ireland’s Olympics hopefuls shine at Indoor Championships
Real news has value SUBSCRIBE
Crossword Get access to over 6,000 interactive crosswords