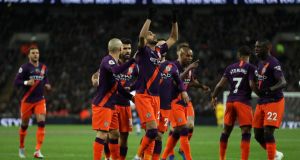 It was difficult to reconcile the intrisic weirdness of this occasion. Wembley yawned with empty seats; the pitch looked like a pudding – a legacy of Sunday’s NFL game between the Jacksonville Jaguars and the Philadelphia Eagles – and, for long spells, there was a strange lack of intensity.

Tottenham continued to look disjointed, pockmarking their play with errors, and Mauricio Pochettino, who had said beforehand that he had never felt unhappier during his time at the club, cut a frustrated figure.

Manchester City scored early through Riyad Mahrez and they did enough to win, even if they were not at their cohesive best. Tottenham almost stole a point late on when the substitute, Dele Alli – on his return from injury – teed up the in-form Erik Lamela. He had to score. But he did not, scraping his shot high.

Tottenham could point to other openings, despite their overall difficulties, but when the Lamela chance went high, one thought occurred: Who can stop City? They are back on top of the Premier League table and they have now ticked off away fixtures at Arsenal, Liverpool and Tottenham.

It was an incongruous sight that greeted the fans – both inside the stadium and from armchairs around the world – when they took their first look at the pitch. The NFL badge was clearly visible inside the centre circle while the Gridiron yardage markers could also be made out.

City are supposed to build from the back but Ederson caught the US vibe at the outset and went downtown with the first action of note. It would produce the breakthrough goal. Kieran Trippier erred twice; firstly failing to read Ederson’s high punt and accidently nodding it back towards his own goal.

Raheem Sterling raced onto it, up the inside left channel and, when he faced up the covering Trippier in a one-on-one, there would be only one winner. Sterling drifted past him as though he was not there and, when he pulled back low from the byline Mahrez finished with the minimum of fuss. City had not conceded a league goal since September 1st. Spurs had it all to do.

The slightly surreal subplots crackled. After three NFL games in two weeks and the Anthony Joshua title fight last month, the Wembley playing surface looked awful while the upper tier of the stadium was virtually empty. Wasn’t this supposed to be a big game?

There were times in the opening half-hour when it felt as though City were toying with their hosts. They manipulated the ball inside the Spurs area, probing for an opening and then a better one. Sterling crossed for Bernardo Silva, who shot wide; Mahrez had a snap-shot after another Trippier error that Hugo Lloris clawed onto his near post and away. Sterling revelled in yards of space.

Spurs bought some comic cuts to the party before the interval. Moussa Sissoko put so much zip on one backpass that Davinson Sanchez assumed it was not for him and allowed it to whizz through his legs – and out for a corner. Lucas Moura was booked for a pratfall.

And yet Pochettino’s team had their moments. Harry Kane spotted Ederson off his line and tried to beat him with a dipping shot from distance. It would not come down enough for him. There was a poor cross from Sissoko when he was free on the right after a Benjamin Mendy mistake – the Spurs midfielder had options in the middle but found none of them – and then, there was a big chance on 34 minutes.

Lamela ushered in Kane, after a loose header by Aymeric Laporte, but the striker’s first touch was heavy. Ederson was already committed to a dart outside his area and he was easily first to the ball.

Pochettino had named the fit-again Christian Eriksen among the substitutes – perhaps he was not so fit, after his excellent performance at PSV Eindhoven last Wednesday? Or, maybe, the Spurs manager did not want to over-exert him on what looked like a dodgy surface. Pep Guardiola did not start with the recently returned Kevin De Bruyne, either.

Sissoko is nobody’s idea of an Eriksen replacement but his brawn was a feature of the evening. Could he batter City into an error? He was certainly a contrast to the twinkle toes of the visitors’s attackers; Bernardo Silva was particularly easy on the eye.

City might have put the game to bed in the 53rd minute and their failure to do so had Guardiola stomping and swiping in the technical area. Bernardo Silva, released by Mahrez, crossed low for David Silva and he seemed odds-on to finish from close range. But he could not set his feet, popped the ball off to Sterling instead and the subsequent shot was blocked. Tottenham rallied upon the Lamela chance, having previously been second best in the second-half, but there would be no equaliser. City march on. - Guardian