Klopp welcomes Liverpool’s break in fixtures ahead of Arsenal clash 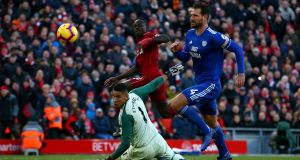 Jurgen Klopp has welcomed an interlude from the crowded fixture list as Liverpool get a full week to prepare for their next assignment.

Liverpool are vying for honours on both domestic and European fronts, contributing towards a hectic schedule in which three fixtures in the span of eight days has been a common occurrence.

However, their early exit from the Carabao Cup means they will not be in midweek action next week, allowing the players – some of whom undertook long-haul trips during the recent international break – a brief respite.

Arsenal await Liverpool next Saturday and Liverpool could travel to the Emirates Stadium as Premier League leaders after brushing aside Cardiff 4-1 to go three points clear of Manchester City, who visit Tottenham on Monday.

Klopp said: “We won the game and that’s really good and for us it’s just the next step.

“Now we have time to recover which is the first time for a lot of the boys and they don’t play in three days again. Our international players haven’t had that since I don’t know when, it’s long ago.

“So we will use the time to recover and prepare for the Arsenal game which will be another nice challenge.”

Mohamed Salah opened the scoring against Cardiff while Sadio Mane struck either side of substitute Xherdan Shaqiri’s first Liverpool goal.

Mane feels Liverpool’s feared front trio comprising himself, Salah and Roberto Firmino are only able to flourish because of the support they receive behind them.

The three frontmen continue to terrorise defences, having bagged 57 league goals between them last season.

But Mane told Liverpool’s official website: “People always talk about the front three – but it’s the team, the work starts behind us. They make it easier, we are lucky boys and score all the time but all the team did their job.”

Shaqiri and then Mane made the game safe for Liverpool, who enjoyed 80 per cent possession and had 19 attempts at goal in a dominant display as they continued their unbeaten start in the top-flight this season.

“We played very well even though it was a little bit tight in the second half after it went to 2-1,” Mane added.

“It’s part of football. But after that we controlled the game and created many chances. At the end we scored four goals so I think we deserved to win.”

Cardiff were brought back down to earth following their first victory of the campaign against Fulham last week and they have now lost seven of their last eight fixtures in all competitions.

However, as well as Liverpool, they have also faced Arsenal, Chelsea, Manchester City and Tottenham in that period.

Cardiff manager Neil Warnock said: “It’s good that we can compete, we’re competing the best we can, and we’ll surprise a few of the lesser teams but I think the top four is a bit beyond us.

“It’s been hard for us because [against those teams] it only takes a second and a little bit of quality and it catches you out. I can’t fault my players.”

Warnock believes City have the edge on Liverpool in the race for the title this season but praised the Merseysiders’ improvement under Klopp.

“I feel Liverpool have got more of a chance in the Champions League and the cups,” Warnock added.

“I just think Man City have got that little bit more week-in week-out in the league.

“But I think Liverpool are the most improved team with the signings [Klopp] has made and heaven knows what’s going to happen if he signs another one or two for next season because they are back in the real big time now.”