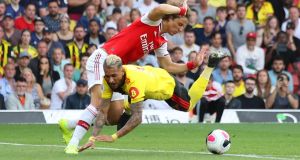 Roberto Pereyra of Watford is fouled by Arsenal’s David Luiz for a penalty during the Premier League match at Vicarage Road. Photograph: Marc Atkins/Getty Images

Quique Sánchez Flores had missed all of this – the thrills, the spills and the very peculiar madness that can turn Premier League football matches into the most gripping of spectacles.

The returning Watford manager watched his team lose their grip in the first half and Pierre-Emerick Aubameyang mete out the punishment with a pair of trademark finishes. The Arsenal striker now has five goals in five matches this season and his complete record at the London club bears consideration – he has 45 in 70 appearances across all competitions.

Game over? Not at all. Not when Arsenal continue to treat the notion of defending properly with such disdain. Unai Emery’s team were the architects of their own downfall and their only fortune was that Watford did not depart with all three points.

They had the chances during a breathless finale when Gerard Deulofeu fired inches off target and Tom Cleverley saw a shot deflect wide off David Luiz before, at the very last, Abdoulaye Doucouré blew a gilt-edged opening, shooting too close to Bernd Leno.

Arsenal have sometimes given the impression that they are rarely too far from the self-destruct button and they pressed it when an attempt to play out from the back through Sokratis Papastathopoulos went horribly wrong, allowing Cleverly to make it 2-1.

Enter David Luiz. Arsenal had been on the attack, with Nicolas Pépé going close and when Watford broke, they were exposed. More specifically, David Luiz was exposed. The central defender hung out a leg just inside his own area at the substitute, Roberto Pereyra, watched the Watford player tumble and got that familiar sinking feeling. The only question was whether the foul had come inside the area. It had. Pereyra converted the spot-kick with great composure.

Flores’s homecoming, which was how he styled it, was the most prominent sub-plot but Mesut Özil’s return felt significant, too. Arsenal fans have wondered how Emery would accommodate the playmaker, who had not kicked a ball this season for various reasons, particularly given the summer additions of Dani Ceballos and Pépé. The answer here was at the tip of a midfield diamond.

It was a narrow look and the midfield was certainly congested at the outset, although Ceballos caught the eye on the left straight away. It was he who sparked the move for the opening goal and, in the process, left Flores and Watford crying foul.

Ceballos stretched into a challenge on Will Hughes, the Watford man went down and, inexcusably, his team-mates close by stopped. It was hardly a given that a free-kick would be awarded. On the contrary. Sead Kolasinac did not stop. He charged forward with the ball and rolled it inside to Aubameyang. What happened next was a showcase of the forward’s finishing skills. He took one touch and spun before summoning tremendous power and accuracy with minimal backlift to beat Ben Foster inside the near post.

Aubameyang would be celebrating again shortly afterwards and this time, Özil was the creator. Moments earlier, the German had stumbled in the centre of the field and lost the ball under no challenge to much eye-rolling. He looked down accusingly at his studs. But here, the weight on his pass that lacerated the Watford defence and freed Ainsley Maitland-Niles was perfect. Maitland-Niles crossed low from the right; Aubameyang tapped home.

Watford had been the better team in the opening 20 minutes, having started with plenty of energy. Arsenal looked a little sloppy. Cleverley extended Leno after excellent work by Hughes and, after Deulofeu had run at Maitland-Niles and cut back for José Holevas, the left back sliced high.

Ceballos got Arsenal playing and he heard the travelling support chorus his name until his surprise substitution on the hour. It was easy to purr over his performance – all beautiful balance, perfect touches and vision – and he also released Özil on 25 minutes, whose deflected cross was just too far in front of Aubameyang.

Watford threatened through Deulofeu and this Arsenal team will always concede chances, quite often after trying to play out from the back. Mattéo Guendouzi was robbed on the edge of his own box by Deulofeu in the 36th minute and Leno could only parry when the winger shot for goal. Andre Gray put the rebound into the side-netting.

It was not the only time that Guendouzi put his team in danger. Early in the second half, Granit Xhaka had to jump into a tackle on Gray after the Frenchman had given away possession with a loose square ball.

Arsenal appeared addicted to taking risks when trying to get moving out of defence and they invited Watford back into the game when one such attempt went horribly wrong. Leno played a deadball square to Papastathopoulos on the corner of the six-yard box but when he looked for Guendouzi, Deulofeu stuck out a boot which diverted the ball to Cleverley. The midfielder banged home a low shot.

The Arsenal support were horrified when Emery withdrew Ceballos and it was notable that there were ironic cheers from them on the rare occasion that one of their players launched a clearance long.

Inspired by Deulofeu, Watford turned the screw after Cleverley’s goal. The substitute, Ismaila Sarr, rolled David Luiz and shot wide. Could Flores’s team find the equaliser? Emery replaced Özil with Reiss Nelson and switched to 4-2-3-1 in an attempt to block the door. Arsenal, though, do not really do that kind of things these days. – Guardian