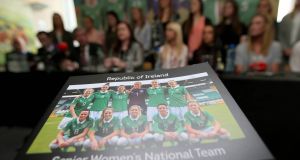 Members of the Irish women’s team have decided not to attend the squad’s first scheduled training session of the week despite accepting an invitation from the FAI to attend mediation late on Wednesday afternoon, but a resolution in the dispute highlighted at their press conference on Tuesday does appear to be a little closer.

“At a team meeting the members of the Women’s National Team decided that they are unfortunately unable to attend today’s training camp,” said Ollie Cahill of the Professional Footballers Association of Ireland in a statement.

“The players have not taken this decision lightly. The players wish to make clear that they simply want the FAI to respect their right to choose their own representatives and have all the outstanding issues which are affecting their ability to achieve their maximum potential for their country resolved in a swift, amicable and professional manner.”

“The players would also like to thank the public and the global football community for the overwhelming level of support they have received in the past 24 hours. Messages of support have come in to the team from around the world and these have been greatly appreciated by the players.”

SIPTU Services Division Organiser, Ethel Buckley, made it clear, however, that the players have accepted the invitation to mediation.

“Members of the team and their PFA Ireland and SIPTU representatives will attend a meeting with a mediator to discuss the issues in this dispute, this evening at 6pm.”

As the process is unlikely to involve face-to-face negotiations, at least initially, the issue of representation may be actually sidestepped for now but the hope is that the issues at the heart of the dispute might be resolved and the players could train normally on Thursday with the threat to their friendly match against Slovakia on Monday lifted.

1 Welcome to Iten in Kenya – home of champions and cheats
2 Glasgow slam European door shut on Munster
3 Ulster huff and puff their way past Bath and into the quarter-finals
4 Premiership Rugby confirms Saracens will be relegated
5 Man City slip up at home to Crystal Palace
Real news has value SUBSCRIBE
Crossword Get access to over 6,000 interactive crosswords