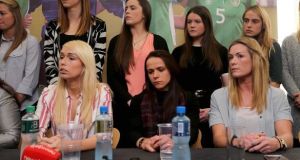 Members of the Republic of Ireland women’s soccer team and other representatives held a press conference in Dublin on Tuesday to highlight what they say is a lack of investment in their side by the FAI. Here is a selection of quotes from the conference.

Anyone who has been away on a holiday, the last thing you want to do is get changed in the toilets. A simple way to resolve it is is to let us keep the team tracksuits. It isn’t a big ask

“There is no reason presented as to why the players are being asked to do this on their own. The only conclusion you can reach is that the FAI prefer to talk to players directly because they reckon that whatever they say will be unacceptable to us as advisers of the national team.”

“Many of the players have lost money playing for the national team, none of them get paid anything and some of the conditions are quite extraordinary.”

“This is about the rights the players have, it’s about respect, dignity, fairness and equality. The fact that we’re here today is a last resort.”

“On five occasions in recent months the FAI has attempted to bring the Players to the table, only to have the offer rebuked at every turn.”

“I think obviously getting changed in the airport toilets is something people think never happens... Aside from us being international footballers. Anyone who has been away on a holiday, the last thing you want to do is get changed in the toilets. A simple way to resolve it is is to let us keep the team tracksuits. It isn’t a big ask.”

“We’re here because we want to field the best international team we possibly can. We want to compete at the highest level and in order to do this, everyone has to commit. There has been some issues, not just in the last few years but for a very long time now.”

“We have been talking to the FAI for a long time now and nothing has been resolved so that’s why we’re bringing the PFAI on board. Because we feel as footballers we have the right to representation. We’re not being allowed this and we don’t understand why because all of our negotiations previously has not resulted in anything so we’re here as a last step and taking extra ordinary measures to get it resolved. We’re willing to do whatever it takes to get it resolved this week.”

“We’re just here looking for borderline basics. On occasions in the past we have been getting changed in public toilets of airports on the way to matches, being given our kit there, having to open our personal belongings and bags and put our kit in.”

“Then we have met the girls en route to the airport to our final destination in London. The four or five of them had to get changed in the toilets and en route back as well. So I think this highlights the lack of respect – it’s not a lot we’re looking for, it’s just basics.

“From an amateur standpoint, there’s certain challenges that are unique to us. Between September 2015 and 2016, we would have taken over and above 40 days (off work). Some girls are taking this as unpaid leave, some are taking as holiday leave. If you look at some of the figures associated with that, they’re huge.

“It’s maybe two months wages out of your 12 months are sacrificed and that’s been going on. We’ve received no reimbursements for six years now. Your five grand or seven grand that you’re missing out on, quickly becomes 40-plus grand. To some people, that might not seem huge, but to us, it’s so significant and would help us so much.”