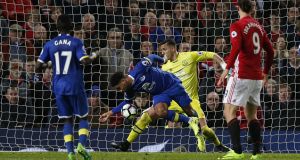 Everton’s Ashley Williams handles the ball in the penalty area, resulting in a late penalty at Old Trafford. Photograph: Inpho

José Mourinho’s cunning plan to qualify for the Champions League by winning the Europa event is going to come in handy if Manchester United continue playing like this. They have taken only two points from two successive home games, and needed a 94th-minute penalty to prevent defeat against a desperately unlucky Everton.

This was a classy and convincing response from the visitors after their abject display in the Merseyside derby, while once again questions were raised about the ponderousness of United’s attack. At this rate they are not going to instil much fear into Europa League opponents, though a certain amount of luck remains on Mourinho’s side, otherwise it would not have been Luke Shaw’s shot that brought about the last-minute penalty.

According to Mourinho the left-back is not currently worth a place on the bench, never mind the pitch, but after coming on midway through the second half he was in position to pile on the pressure when the ball came his way with seconds to spare.

His shot was low but on target, it hit the diving Ashley Williams on the arm rather than the head, and Everton’s outstanding defender had to make the walk to the dressing room as Zlatan Ibrahimovic stroked in the penalty.

Shaw might have made the bench for this game, in spite of José Mourinho’s reservations at the weekend, but Wayne Rooney did not. After appearing for a mere 16 minutes against West Bromwich Albion, United’s erstwhile captain was omitted with what his manager described as “pain in both ankles”.

Whatever interpretation one wishes to put on that it would appear the 31-year-old’s time at Old Trafford is drawing to a close, at a point when Ibrahimovic, already four years older, is claiming to be capable of carrying on for another two or three years.

“I know the Premier League is begging me to stay,” the Swede told BT Sport before the game. “I came here at 35 and everybody thought I was in a wheelchair, but the lion is still alive.” Giving his opinions of the best strikers around in the Premier League Ibrahimovic mentioned Romelu Lukaku – “strong” – and Sergio Agüero – “good all round” – without mentioning himself. Modesty? Hardly. “Lions don’t compare themselves with humans,” he said, making a bid for the Eric Cantona award for talking the pith.

Lukaku had a quiet game against Liverpool last time out and had been invited by Ronald Koeman to show his worth against United, who in turn struggled without Ibrahimovic in the goalless draw against West Bromwich.

Ibrahimovic was the first to show up, powering through Mason Holgate’s challenge in the opening minutes and forcing Williams to come across with a covering block, before a run from Lukaku at the other end took him past Marcos Rojo to be stopped by an Eric Bailly tackle on the edge of the area.

These turned out to be mere preliminaries to Everton taking the lead in bizarre fashion midway through the first half. Kevin Mirallas had just brought the first save of the game with a shot from a narrow angle, and from the corner David de Gea conceded Williams sent a looping header vaguely goalwards.

It was slightly awkward for Rojo to deal with, though there was still no apparent danger until with his back to goal Phil Jagielka stuck out a boot to reach the ball first and flick a shot through De Gea’s legs.

If West Brom’s refusal to cross the halfway line on Saturday irked Mourinho, the look on his face at the manner in which United fell behind suggested an even darker mood, though the United manager cannot have it both ways.

Everton did more than cross the halfway line here, they moved the ball around and played with a confidence that had been absent at Anfield, and the opening goal was a reward for their spirit and adventure even if it came as a gift from a generous defence.

It was up to the home side to respond, and they almost did on the half-hour when Joe Robles could not hold Daley Blind’s free-kick and Ander Herrera’s follow-up attempt skimmed the crossbar. Herrera brought another save from Robles before the interval but Everton also had their moments, particularly on the couple of occasions when Lukaku found himself able to run at Rojo.

Mourinho sent Paul Pogba on for Blind in the second half, a switch that necessitated all manner of recalculations in the United back line, though at least the substitute got involved quickly, heading against the bar from Ashley Young’s free-kick.

There were predictable bookings for Gareth Barry and Ross Barkley as the game became a little overheated, with Young cautioned for the home side, and Kevin Mirallas was sensibly withdrawn before he could get into serious trouble.

Young was pulled for the same reason, though sending on Shaw in his place was surely Mourinho’s last desperate gamble. Ibrahimovic forced a close-range header past Robles from Herrera’s cross but was brought back for offside, then Marouane Fellaini had a chance to score against his old club but hit his shot high into the Stretford End.

Everton remained tight at the back and in control, while United remained short of ideas. Lukaku might have made the game safe had he looked up and found Barkley after another surging run past Rojo near the end; instead he went for glory and saw his shot charged down by Bailly.

Shaw was not a great success until his moment arrived in stoppage time. Neither, it has to be said, was Ibrahimovic, who despite his rest was as slow and predictable as everyone else in red, putting a last-minute header over the bar before United gained redemption from the unlikeliest source.